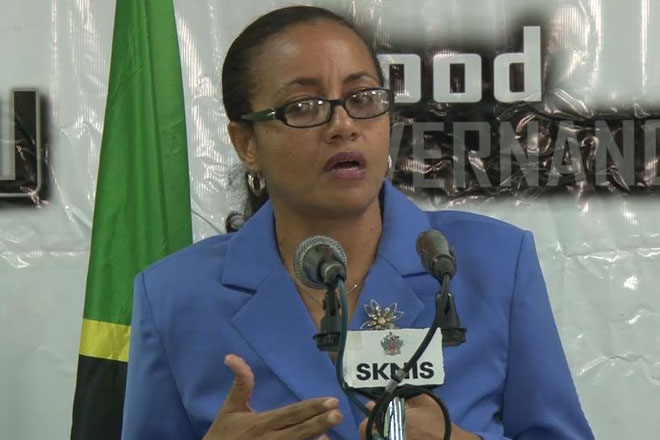 Basseterre, St. Kitts (SKNIS) — Residents of St. Kitts and Nevis have been assured that as soon as a report is provided by the National Institute of Occupational Safety and Health (NIOSH) on the Basseterre High School (BHS) situation, it will be released to the general public.

During the Prime Minister’s Press Conference held May 27, Minister of State for Health Honourable Wendy Phipps updated that the team of experts from the Pan American Health Organisation (PAHO)-funded NIOSH had concluded its investigation into possible sources of contamination at the Basseterre High School (BHS), and a report was being awaited.

“Contrary to what has been uttered in the press over the last five or six days, neither Minister Richards nor I are in receipt of the NIOSH Report,” Minister Phipps stated. “When that is made available, we will have no problems divulging it to the public, because what is going on at BHS is very much a public health issue, as it is an educational issue.”

She further revealed that the multi-stakeholder group that had been put together to discuss the BHS matter was looking at possible locations for the entire school complex, in the short-term and medium term.

“We have received an estimate from one source attached to the Public Health Department in terms of what it may cost in terms of putting down temporary buildings – wooden construction, so that is being looked at,” Minister Phipps revealed. “There are also several other options that are in front of us, we’re trying to determine which are the best options, in terms of cost in terms of convenience and so forth for the students, recognizing that in spite of the difficulties, we do not want them to be operating in a learning environment that has less amenities than any other high school situation in St. Kitts and Nevis because that would not be fair to them.”

It was noted that the NIOSH report would also influence the long-term solution that the Ministry of Education would take after consultation with Cabinet. Minister Phipps noted that the shift-system currently in operation, does not apply to 5th Formers.

“The venue-sharing arrangement continues, obviously, with Washington Archibald High School, with the exception of the 5th Form classes,” she said. “Because those classes are preparing to take exams, we could not run the risk of having them being disrupted in terms of classroom sharing.”

The BHS 5th Formers are currently attending classes in a floor of the Premier Dental Ltd. building, which is adjacent to the Washington Archibald High School.

Deputy Prime Minister and Minister responsible for Education, Honourable Shawn Richards who also attended the Prime Minister’s Press Conference, further revealed that the premises of the Historic Fort Thomas Hotel is being looked at as one possible temporary location for BHS.