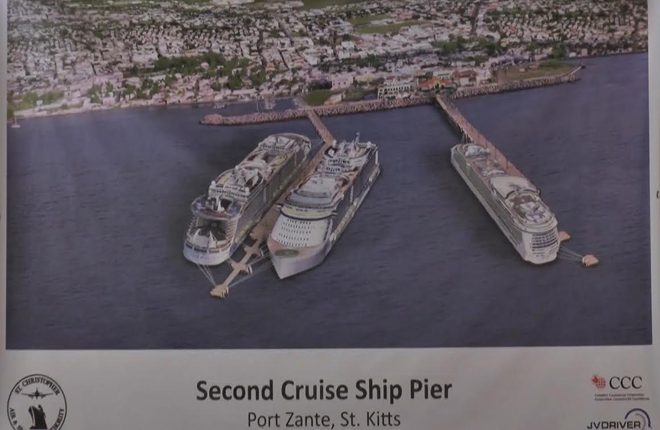 (ZIZ News) — Minister of Public Infrastructure, The Hon. Ian Liburd has emphasized the direct and spinoff benefits of a new cruise ship pier.

During the St. Christopher Air and Sea Port Authority’s Press conference on Monday to address the construction of a 2nd cruise pier he noted that “the new and enhanced ports will accommodate larger cruise ships”

“As new and larger vessels come online, the new, enhanced ports will capture their itinerary calls leaving the existing older ships to continue servicing the lesser equipped ports, and of course a second cruise pier will position St. Kitts to be the recipient of those larger cruise vessels”, Minister Liburd said.

Minister Liburd noted that this development would not only affect SCASPA but it would also have an impact on the grassroots economy.

“This development is not about SCASPA. It is about the national consideration because when we assess the benefit of a second pier to the country as a whole and approach it as a necessary national infrastructure and not just a pier, we are aware of the impact that such a development has on the grassroots economy”, he added.

Minister Liburd said more passengers will create opportunities for employment and self-employment of Kittitians and Nevisians and that there will be an increased earning of foreign exchange and an opportunity to showcase St. Kitts-Nevis for return land based visits.

He added that there will be an increased purchase of real-estate and promotion of the Citizenship by Investment Programme (CBI).