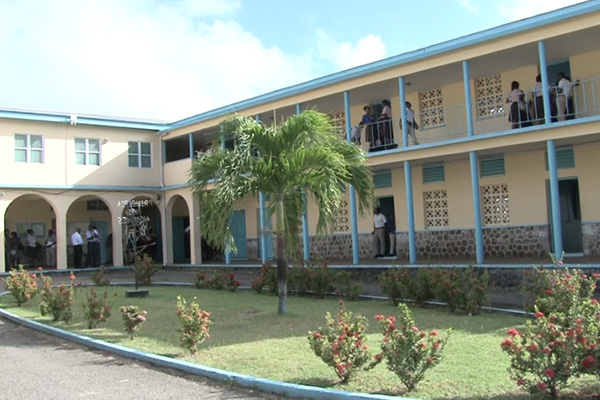 Ministry of Education focuses on school safety at BHS

Basseterre, St. Kitts, (SKNIS) — The Ministry of Education along with the Ministry of Health have been working together to ensure that the health, security and safety of teachers, students and visitors of the Basseterre High School (BHS) are maintained.

Minister of Education the Hon. Nigel Carty stated that both Ministries are addressing any concerns that the school may have.

“There have been some concerns being expressed by the school and we want to ensure that we work assiduously as possible with all the agencies within the government to address anything in the school that may be a cause or that may be a factor in some of these things,” expressed Minister Carty.

Minister Carty noted that when research was conducted by the Caribbean Industrial Reseach Institute (CARIRI) in November 2012, results indicated that there was a mold problem in the Biology, Chemistry and Physics labs which normally occurs when a place is closed for a long period of time.

“The Biology lab had been closed for in excess of a year,” the Minister explained. “It was full of dust and mold and other life forms which is consistent of a building being closed for an extensive period of time. The chemistry and physics labs were in a similar condition. They had been unoccupied at the time and there was an infestation of mold and dust and other things that come with that environment.”

Minister Carty further explained additionally that CARIRI also tested for a number of gasses and inorganic substances which revealed that these were not a problem.

“Now if there is a basis for us to look at those things again we will look at them…We would want to see if we can narrow down the issues that there may be at this school.”

The Minister reiterated that both Ministries will “look at those things which are critical to the safety of the students and teachers and all those who work in this environment.”

Representatives of the Ministry of Education including Permanent Secretary Ionie Liburd-Willett, Chief Education Officer Clarice Cotton, Education Planner Quinton Morton along with Chief Medical Officer Dr. Patrick Martin Dr. Milton Whitaker (who was the first investigative researcher on BHS in 2012) recently had a meeting with stakeholders to discuss the issues. These included Principal and Deputy Principal of the school, President and Vice President of the Parent Teacher Association (PTA) all met to discuss some of the lingering concerns at the BHS.

Minister Carty stated as a result a very specific programme of intervention has been developed to address what the concerns were which will be headed by Dr. Whitaker and supported by the Ministry of Health.

Minister of Health Hon. Marcella Liburd stated that her Ministry will work tirelessly to ensure the health of all stakeholders of the school.

“We in the Ministry of Health are prepared to play our part in ensuring that the environment is a healthy environment for all those who use these premises.”

Dr. Whitaker and a number of persons from the Ministry of Health have already started to assess the school. Information on the results will be shared with members of staff and persons in the public who interface with the school including members of the PTA as soon as they are received.