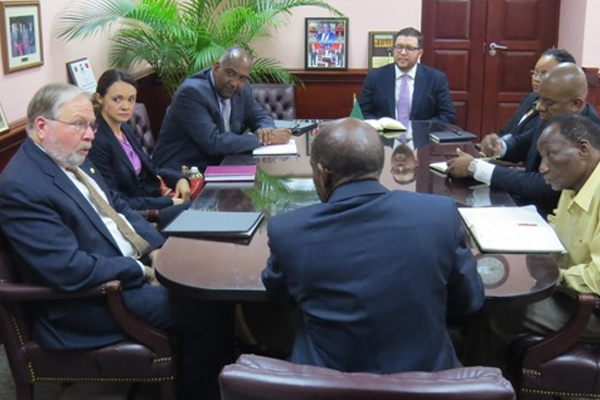 Shortly after, Ambassador His Excellency Frank Almaguer and other members of his team, accompanied by the resident, OAS Director, Mr. cent paid a courtesy call on the Prime Minister the Rt. Hon. Denzil L. Douglas.

Prime Minister Douglas welcomed Ambassador Almanguer and members of his delegation and thanked the western hemispheric body for acceding to his administration’s request to monitor the February 16th poll.

Pointing out that the poll is taking place at this time, Prime Minister Douglas pointed out that St. Kitts and Nevis has come a long way since political independence.

“We welcome the opportunity. We are part of the fraternity of democratic nations,” said Prime Minister Douglas, who noted that the OAS has in the past made recommendations for fair and equal boundaries.

Ambassador Almaguer said his team will hold discussions with political parties, the Electoral Commission, the Supervisor of Elections and several non-governmental organisations.

“Electoral observations for us are very important and I can assure you, Madame Ambassador that we will have a mission up to the requirements of your country and of your democracy,” Insulza told Henry-Martin.

“I believe that this will constitute another rung on the ladder of successes we´ve had in the execution of elections that prove that we want to remain among the ranks of those that honor and respect what democracy represents, not only for our nation, but for our peoples,” Henry-Martin said.