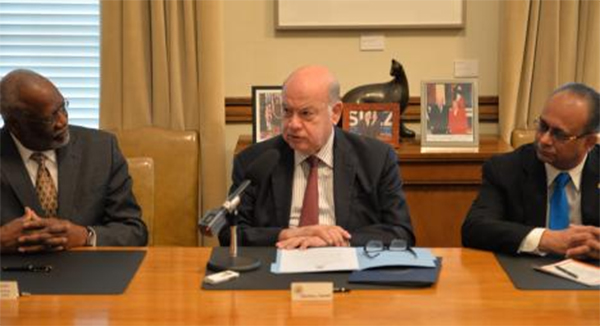 Washington, USA — The secretary general of the Organization of American States (OAS), José Miguel Insulza, and the permanent representative of Dominica to the hemispheric Organization, Ambassador Hubert Charles, on Tuesday signed an agreement stipulating the conditions for the work of the Electoral Observation Mission (EOM) of the OAS that will observe the general elections on December 8, 2014, in the Caribbean country.

At the signing ceremony of the agreement on the privileges and immunities of observers, held at OAS headquarters in Washington, DC, Insulza expressed his conviction that “Dominica will have a normal and peaceful electoral process.”

He said the OAS has been present “in 54 elections in the Caribbean since 1962” and this will be the second EOM in Dominica.

The OAS leader appointed as chief of mission the secretary for multidimensional security of the OAS, Adam Blackwell. The team will comprise observers from Antigua and Barbuda, Canada, Chile, the United States and Venezuela, who arrive in the country on December 3 and will hold meetings with representatives of political parties, government officials, media and social organizations.

For his part, Charles said “we are very pleased and happy with the presence of the OAS,” and expressed his confidence that the report that will be prepared by the EOM at the end of the electoral process “will be run on a very professional level.”

In the elections of December 8, citizens of Dominica will elect 21 members of Parliament, among whom the new prime minister will be named for the next five years.