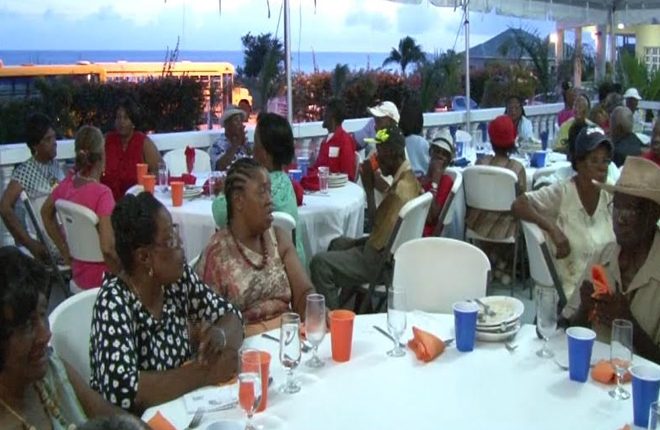 (SKNIS): Senior citizens in St. Kitts were decked out in their “Sunday Best” to attend this year’s Month of the Older Person’s Gala that took place at Manhattan Gardens, which was appropriately transformed for the occasion.

Senator and Minister of State, Honourable Wendy Phipps, took the opportunity to encourage older nationals to think about the legacy that they would leave behind.

“All of us in St. Kitts and Nevis need to focus on the mark that we plan to leave in this place,” Minister of State Phipps said. “What type of mark am I going to leave? Am I going to set a good example to a young person in terms of teaching them the value of sacrifice and hard work? Am I going to set the good example in terms of teaching them to appreciate that there is benefit in eating ground provisions and fish and vegetables and fruit so that they can live a longer more healthy life? So that we don’t have to see JNF filled up on the medical ward with people who have lost toes, and feet or who are up there suffering from strokes and don’t even know what time of day it is? Because there’s a lot that you could teach our young people with that.”

She added that the older ones did their part toward the development of the Federation, further noting that: “It did not happen overnight, it happened by dint of hard work, it happened by sacrifice.”

“It happened by those of you who were parents who went without shoes and worked for your children, who dropped soda in the sugar industry, who carried water and everything else and tried to make a dollar out of 50 cents,” she said. “And what we are seeing happening now in St. Kitts and Nevis is that as Dawn indicated earlier, it’s not just the old that Springfield (Cemetery) has a space for, it’s the young people.”

Senator Phipps reminded of the theme of the month and why it is important to safeguard older ones.

“One of the things that you would have noticed as we began to celebrate the Month of Older Persons is that we were focusing on a theme that said we should “Take a Stand Against Ageism,” Minister of State Phipps said. “And what that simply means is that we should not put up with ill-treatment of persons based on their age, we should regard each other as equal, it means that we should not discriminate against people because they may be older or it could be the other way around, that you (older persons) discriminate on them because you figure they’re young, they’re stupid and they don’t know anything.

But at the same time, it also means that we also give credit to our seniors in St. Kitts and Nevis who have done a tremendous job in helping to bring this country to where it is.”

Ann Wigley, Deputy Director of Social Services, was also surprised with a token of appreciation from the Home Care Officers whose programme commenced in 2002 under her supervision.