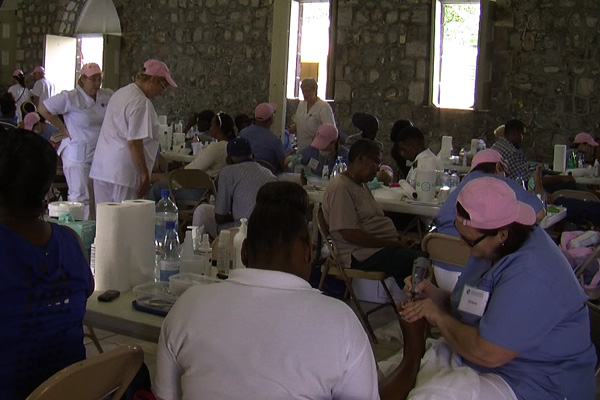 (ZIZ)–The last time the group of doctors, nurses, aestheticians and pedicurists along with the graduating class from the North American School of Podology (NASP) was here, some 700 people took advantage of the free services they offered.

This week, that number jumped from 700 to 900 as many came, particularly those with diabetes, to have their feet checked for build up of corn; thick and rough skin or overgrown toenails.

Owner and founder of NASP, Dr Katherin von Gavel said there were a number of people who had to receive additional foot care at the general hospital.

She said, “We had several people that we’ve seen over the last few days that we did have to send some to the local medical facility immediately, so we’re hoping that they’re looked after very well. In general, we’ve been able to help people understand the importance of looking after their feet, especially the diabetics that came to see us.”

Past President of the Rotary Club of Liamuiga, Chris English said he is particularly pleased with the spinoff effect this initiative has on the locals.

And the President of the St Kitts Basseterre LEO Club, Akeem Bacchus used the opportunity to encourage other young people in the federation to help build their communities by getting involved in programs like the Foot Care Clinic.

“It’s very important that young people get involved. It’s not good enough for us to just accept things; go to school, get an education and just go about lives not really giving back to the community. I think it’s a very fundamental thing that every young person should be involved in,” he said.

The team from the North American School of Podology first came to St Kitts in 2007 and now comes here once every two years.