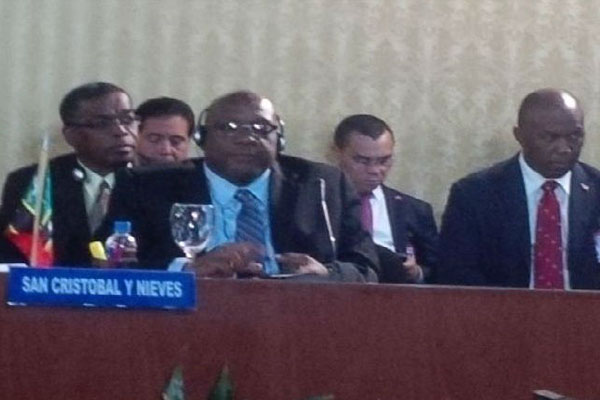 Basseterre, St. Kitts (SKNIS) — St Kitts and Nevis has called for “the peaceful co-existence of countries in this hemisphere” and reaffirmed that “it values the enduring principles of non-interference, international sovereignty and international solidarity and a peaceful resolution of disputes, all of these have long kept the hemisphere safe”.

This is according to Prime Minister of St Kitts and Nevis, Dr the Hon Timothy Harris who revealed that he attended the ALBA-PTA Summit held in Caracas, Bolivarian Republic of Venezuela on March 17, 2015 and took the stance that the Federation of St Kitts and Nevis is supportive of the efforts to reduce the tension between the United States of America and Venezuela and urged that a sense of normalcy be restored between the two countries. As such, the Prime Minister stated that the Federation is in support of the proposal put forward by the Prime Minister of Antigua and Barbuda, Hon. Gaston Browne, for a negotiated resolution of the dispute.

Prime Minister Harris emphasized that St Kitts and Nevis enjoys excellent relations with the United States and underscored that it is an important and critical ally. The Federation’s economic stability including trade, manufacturing and tourism are linked to the success and prosperity of the United States of America. Similarly, the Prime Minister drew attention to the fact that Venezuela and St Kitts and Nevis have enjoyed an amicable relationship for many years and those relations have been strengthened through several arrangements including the Petrocaribe initiative and ALBA. Gratitude was expressed to the Government of Venezuela for its assistance in the areas of energy, housing, agriculture and fisheries.

“The peace, stability and security of our allies are important to us in St Kitts and Nevis”, Prime Minister Harris stated. “In this regard we must call for peaceful co-existence. Equally, the hemispheric bodies like the Organization of the American States (OAS) have dispute resolution mechanisms of which member states can take advantage. St Kitts and Nevis should always be the voice of reason, peace, justice and prosperity to all peoples and countries”.