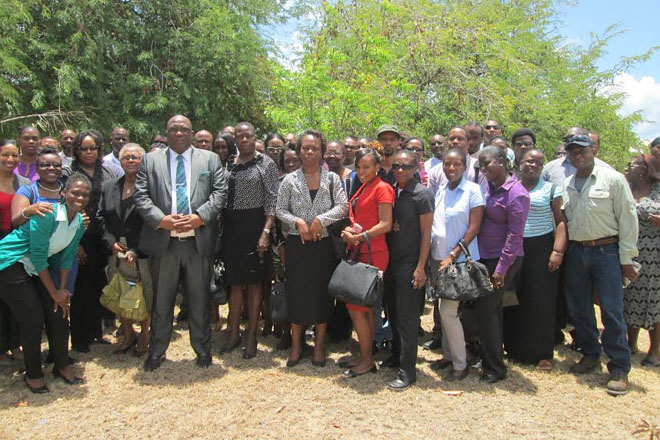 PM Harris: PEP workers, will be given a fair chance

The series of meetings formed part of the Government’s ongoing efforts to communicate clear expectations to its staff, improve employee engagement and workplace relationships, and ensure sustainable performance in the public sector.

While congratulating and encouraging all workers during one of the staff meetings on Thursday, the Prime Minister had special commendation and advice for People’s Employment Programme (PEP) workers who “continue still to be on the payroll.” Prime Minister Harris said that they were still on the PEP although “the International Monetary Fund (IMF) has told us PEP was never intended to be a permanent programme.”

The Prime Minister continued, “PEP was intended to take some people off the dole of unemployment and give them a good feel for a while, and everybody saw through it. That is why the banks are not going to give you a loan once you are on PEP, that is why the US will not accept that for purposes of determining your eligibility for a VISA because they know at some point in the future it will come to an end. The International Monetary Fund (IMF) uses a word, saying PEP is not sustainable, which means that as you look further into the future, it cannot last.”

Dr. Harris pointed out that when the previous government went to the IMF for assistance, the Douglas-led regime was at a stage where it could not pay its bills. That’s why the government’s creditors were told they would have to take a so-called haircut, he said.

“That is why the 85% increase in electricity was imposed, that is why VAT came and even in the face of all of these, the measures were not enough to allow the government sufficient space to meet all of its bills and be able to pay. That is why the government stopped the increment for some three years,” Prime Minister Harris said, referring to the period between 2011 and 2014 when the Douglas-led regime imposed on civil servants a wage freeze and took away their increments. In January 2014, the former government discontinued the wage freeze and restored incremental payments.

Context: The International Monetary Fund’s St. Kitts and Nevis Country Report published in September 2011 stated that the authorities started to implement a strong fiscal adjustment program at the end of 2010, after having been “faced with increasing fiscal imbalances.” The IMF report said elements of the program included civil service reform. “St. Kitts and Nevis’ public sector is large even by standards of small states,” the report said, adding that, “In order to underpin improvements in the fiscal position during the program period, the authorities will freeze the wage bill for the next three years.”

Yet, on December 21st, 2012, a mere 16 days after Members of the Federal Opposition filed a Motion of No Confidence in the Douglas-led administration, the government launched the People Employment Programme (PEP), which would see more than 4,000 people ultimately participate in the programme.

The civil service employs close to 5,000 people permanently, Dr. Harris said on Thursday. “So that is like a second civil service that Douglas added. How could you pay twice? It can’t happen. It’s not practical and it couldn’t last without putting the country back into difficulty,” Dr. Harris said. Prime Minister Harris added that the annual wage bill for the federal government’s permanent workers is about $180 million, which is $15 million per month.

At the start of 2016, PEP had reportedly cost the country more than $165 million. However, a recent productivity and performance assessment of PEP by the Caribbean Development Bank revealed that fewer than 140 of the more than 4,000 workers benefited from sustainable training.

“We have said that we are not going to come in and turn away people,” Prime Minister Harris assured government employees this week.

“However, people including those who are on the government payroll permanently will have to perform. We are not going to tolerate any slackness and I make, and we make, no apologies for saying that. People have to respect their job and make themselves indispensable everywhere they go,” Prime Minister Harris said, adding, “We have said that when opportunities come in any department, the PEP worker should be given a fair chance to now come on permanently.” Dr. Harris said that PEP workers should look for vacancies throughout the public sector, rather than focusing only on the department where they work.