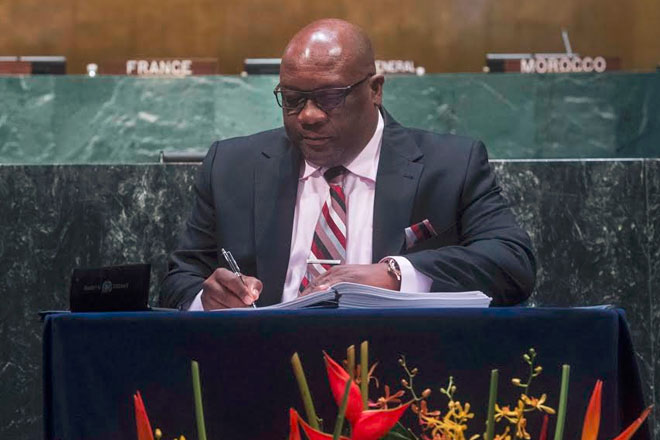 (PRESS SEC) – The Federation of St. Kitts and Nevis was one of 175 nations that signed the landmark Paris Agreement on climate change at the United Nations in New York on April 22nd, Earth Day.

Prime Minister Dr. the Honourable Timothy Harris signed for St. Kitts and Nevis, which was one of 15 Parties congratulated by UN Secretary-General Ban Ki-moon for already having deposited their instruments of ratification.

The Paris Agreement will become legally binding 30 days after at least 55 countries that are collectively responsible for 55 percent of global greenhouse gas emissions submit their instruments of ratification to the United Nations.

Article 20, paragraph 1, of the Paris Agreement states, inter alia, “To become a Party to the Agreement, a State or regional economic integration organization that is a Party to the Convention needs to deposit its instrument of ratification, acceptance, approval or accession with the Depositary. A Party to the Convention that has signed the Agreement may deposit its instrument of ratification, acceptance or approval following signature.”

Declaring Friday’s ceremony as historic, the United Nations Secretary-General told reporters, “This is by far the largest number of countries ever to sign an international agreement on a single day.”

The Paris Agreement is named for the city in France, where 196 Parties to the UN Framework Convention on Climate Change (UNFCCC) met last December at the 21st session of the Conference of the Parties (COP21) and adopted it. Its goal is to limit global temperature rise to a 1.5 degrees Celsius target.

In addition to Prime Minister Harris, the St. Kitts and Nevis delegation to the United Nations included Mr. Duncan Wattley, Director of the Department of People’s Empowerment in the Office of the Prime Minister, as well as three staff members at the Permanent Mission of St. Kitts and Nevis to the United Nations, Ms. Naomi Bradshaw, Ms. Niyan Farrell and Ms. Ghislaine Williams.