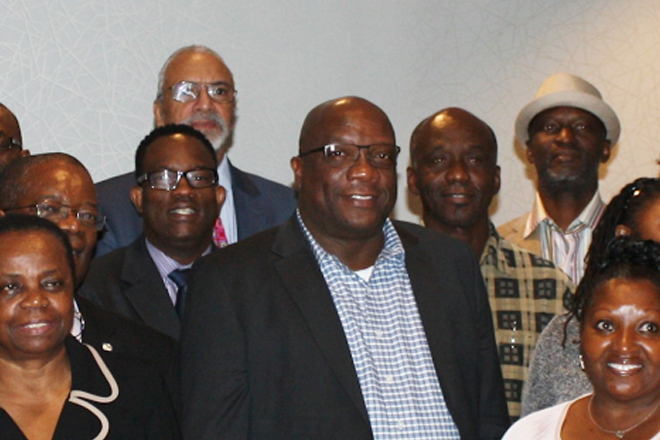 The meeting was held at the Bethesda Marriott in Maryland on the fringes of the 2016 IMF/World Bank Annual Meetings in D.C. The lively discussions focused on all that the Government is doing to secure the future of the Federation, its families and youth, as well as on the Nationals’ affinity to their homeland and their desire to keep abreast of the latest information about it.

Her Excellency Dr. Thelma Phillip-Browne, St. Kitts and Nevis’ Ambassador to the United States of America, blessed the proceedings, and His Excellency Dr. Everson Hull, Ambassador and Permanent Representative to the Organization of American States, also delivered remarks. After the meeting, Her Excellency reported that, “The Prime Minister highlighted the advancements in the country since the Unity Government assumed office, and assured Nationals that it is a stable government working towards the benefit of all citizens no matter their political preferences.”

Ambassador Phillip-Browne added: “Prime Minister Harris emphasized that nation-building is a long journey and the Government is in it for the long haul. The Prime Minister underscored the progress that has been made in a number of areas, and his comments resulted in a productive conversation with Nationals surrounding ideas for nation-building, youth development and employment.”

Dr. Harris discussed his Team Unity Government’s successful restructuring and repositioning of the oldest Citizenship-by-Investment Programme in the world, as well as the recent appointment of Mr. Les Khan, a well respected risk mitigation expert, as the new Chief Executive Officer of the Citizenship-by-Investment Unit (CIU). Prime Minister Harris also highlighted the proactive efforts being made by his administration to build upon the country’s relations with long-held diplomatic allies, such as Canada, Taiwan, and the United States, in order to increase opportunities for all of its citizens.

Proactive diplomatic efforts include the reinstatement in April of Diplomatic Week, which is the Prime Minister’s brainchild dating back to when he served as Minister of Foreign Affairs from 2001 to 2008. The Government is also moving apace with establishing more diplomatic relations and visa-free arrangements around the world, including in Africa, Asia and Europe.

An auspicious day for diplomacy was April 11th when Her Excellency Shirley Skerritt-Andrew, High Commissioner for St. Kitts and Nevis in Canada, presented her Letter of Introduction to the Right Honourable Justin Pierre James Trudeau, Prime Minister of Canada. This made her the first Foreign Head of Mission to present to Prime Minister Trudeau, as pointed out in a press release by St. Kitts and Nevis’ Ministry of Foreign Affairs.

A few weeks before the announcement of Her Excellency Skerritt-Andrew as High Commissioner, the Prime Minister of St. Kitts and Nevis said that, “We are committed as a Government…to make Canada a foreign affairs priority,” while adding, “For the first time, St. Kitts and Nevis, on its own, will be opening an Embassy in Ottawa, Canada.”

At Friday’s meeting, Prime Minister Harris spoke about the tremendous impact of his Government’s decision to remove the 17% VAT from food, medicines and funeral expenses. This move saw families experience significant relief; some local companies report record sales, and the Federation’s wholesale and retail sector grow impressively by 9.13% in 2015.

Dr. Harris also mentioned that, as of August 31st, 2016, EC$12,590,301 was paid to 1,872 former sugar workers or legal representatives of those who are deceased. Applications were made to the secretariat of the Sugar Workers’ Restoration Fund Committee after the Team Unity Government received a $16-million-dollar grant from Venezuela. When the sugar industry closed in July 2005, the then-government promised $44 million in severance payments, but only $28 million was paid.

The Prime Minister reminded the Nationals that, under the Team Unity Government, the Silver Jubilee Athletics Stadium in Bird Rock was renamed the Kim Collins National Stadium on April 5th, 2015 (Kim Collins’ 39th birthday) during the hosting of the 44th CARIFTA Games at the sporting complex. The veteran sprinter from St. Kitts and Nevis is best known for placing 1st in the 100 metres at the 9th International Association of Athletics Federations (IAAF) World Championships in Athletics held in Paris, France in 2003, which made him the Fastest Man in the World.

Prime Minister Harris added that, upon completion, an all-inclusive and non-partisan National Heroes Park is going to pay homage to every single one of our National Heroes. The nation so far has five National Heroes. Dr. the Rt. Excellent and the Rt. Honourable Sir Kennedy Simmonds became the only living National Hero when on June 28th His Excellency the Governor-General Sir S.W. Tapley Seaton GCMG, CVO, QC, JP formally conferred the nation’s highest award to him. During Friday’s meeting, Dr. Harris told the attendees that a broad-based committee will develop criteria for the designation of National Heroes, to ensure diversity, for example, in age, gender and profession.

The Nationals were enthused by the Prime Minister’s report, which included news of a forthcoming cancer treatment centre and a mental health day treatment centre. It was the consensus of the attendees that the Government is performing exemplary well in promoting its prosperity agenda and people-centred policies.