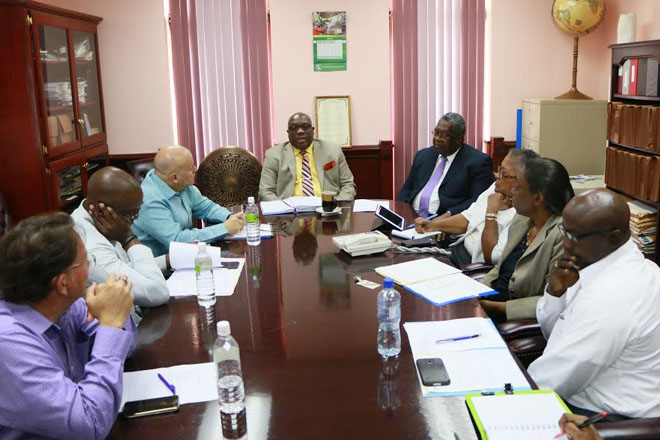 “This represents an action plan to reduce homicides and violent crimes in the Federation,” Prime Minister Harris said, adding that, “Not a day is to be wasted in terms of the fight and the commitment of this Government to this matter of crime because we recognize that we are at a critical stage, and the sooner we act the better.”

The urgency of the crime situation was brought home on February 16th, 2015, the day that Team Unity won a resounding victory at the polls. That’s because the seventh homicide for the year occurred on Election Day. The next day, the eighth homicide for 2015 took place.

One week after the launch of the Six-Point Plan, high-ranking officials from both the Royal St. Christopher and Nevis Police Force and the Chamber of Industry and Commerce (CIC) held a meeting on July 22nd, 2015.

“This meeting is further testimony of our implementation of our Six-Point Plan, particularly as it relates to our engagement with major stakeholders and our collaboration strategies,” then-Assistant Commissioner of Police Vaughan Henderson said, adding that, “The buy-in we have gotten from the business community is super.”

On July 23rd, 2015, the St. Kitts and Nevis Information Service (SKNIS) quoted Mr. Richard Boon, the Managing Director of Timothy Beach Resort as saying, “Over the years, we have had some difficulty with crime, but over the last six months, there has been a visible decline.” Mr. Boon added: “With the Six-Point Plan that is going to be implemented, I believe that honest folks can relax and the criminal elements need to watch out because their day is done.”

The then-Vice President of the Chamber of Industry and Commerce, Mr. José Rosa, also went on the record with SKNIS in July 2015, saying: “We in the private sector are glad about all the efforts, and we believe it is going in the right direction. We need to give some time for those plans to be implemented. As for the private sector, we are going to work together with the police, making sure the plan is implemented.”

Speaking in Parliament on November 17th, 2015, Prime Minister Harris said that, “Although homicides are unacceptably high, since the launch of our Six-Point Plan, the homicide rate dropped from an average of about three homicides per month to now one. We certainly would wish to bring this to zero.”

Three months later, Mr. Rosa was elected CIC President at the 67th Annual General Meeting of the Chamber of Industry and Commerce. Also in February 2016, on the first anniversary of the Team Unity Government, Prime Minister Harris addressed the nation and announced that, “Major crimes in 2015 were reduced by 16.7% relative to 2014, thanks in part to our Six-Point Plan.”

Then, effective April 1st, 2016, the Cabinet of Ministers removed all duties and customs service charges, until December 31st, 2016, on all surveillance equipment to be used by households and businesses.

Mr. Damion Hobson, Immediate Past President of the Chamber, told WINNFM in April 2016 that, “We are very happy with the news…The Chamber wrote to the Ministry of Finance about it after consultation with the Police High Command. Basically, police were saying they would like to get as much cameras throughout St. Kitts and Nevis to add to their detection systems, so we requested the concessions and the government gave us those concessions.”

On April 28th, 2016, Dr. Harris told Chamber officials at a roundtable discussion with them that, “We believe that every commercial entity, especially of a certain size, every bank and every supermarket must have surveillance systems in order to play a responsible role in society.”

Two weeks earlier on April 14th, 2016, at the passing out parade for recruits of the St. Kitts and Nevis Defence Force, the Prime Minister said in his Feature Address that, “All hands are required to be on deck to assist our brave law and security enforcement officers in curtailing the activities of criminals.”

The Police High Command and officials of the Chamber of Industry and Commerce last met on June 3rd, 2016, “to discuss the way forward in the fight against crime,” according to a statement issued jointly by the two organizations on Friday.

The meeting was held three days after Commissioner of Police Ian Queeley affirmed on May 31st that, “We have always regarded the Chamber as a valued partner and will endeavor to keep it that way.” During the meeting, Commissioner Queeley and his team updated the Chamber officials on the successes achieved by implementing the Six-Point Plan and the 2016-2019 Police Strategic Plan in general.

“Both institutions are in agreement that the fight against crime requires the cooperation of the entire civil society and the involvement of other community-based organizations. Both parties also agreed that the meeting was fruitful and have committed to closer collaboration as we work together to ensure citizen safety by creating and maintaining a secure environment where we can live, work and do business,” the last two sentences of the joint statement read.