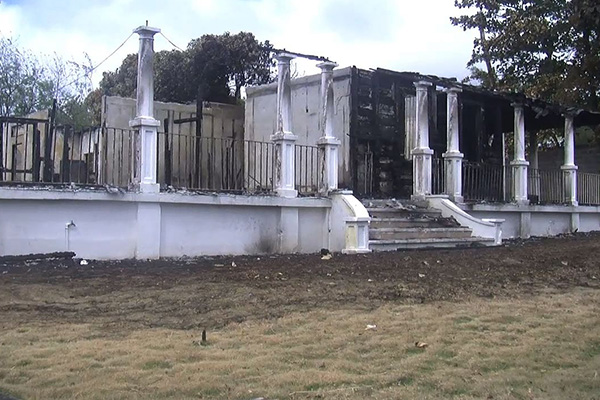 ZIZ News — As investigations continue into a pair of Sunday morning fires, the Fire Department has determined that the blaze at the OAS Secretariat was deliberately set.

He said, “During an inspection we discovered some items that were used to lit the fire, it was some sort of accelerant and so that alone is an indication that arson was involved in this case.”

ZIZ has also learnt that fire officers found a burning rag soaked in a flammable liquid tucked under a window on the left side of the building.

They also found another soaked rag soaked in another window next to a propane tank…that rag wasn’t lit.

O’garro said they caught that fire early before it spread.

Meanwhile, investigations continue into the fire at the Venezuelan Embassy and while the department also suspects arson in that case, O’garro says they need to investigate further.

Without giving much detail, he told ZIZ News that certain items were also found at that scene that could indicate that it was deliberately set.

Prime Minister, the Right Honorable Dr. Denzil Douglas has since spoken out against the fires at the OAS Secretariat and the Venezuelan Embassy.

In a radio and television address on Monday afternoon, Prime Minister Douglas described them as acts of violence meant to destabilize the country.

He said while his government respects the right to voice one’s disagreement with government’s policy, he does not condone acts of violence.

“My government will absolutely not tolerate any operational shift from disagreement and protest to destruction and mayhem,” he said.

He said any person involved in creating mayhem and destruction would be dealt with to the full extent of the law.

He added, “We have created a model nation here in St. Kitts and Nevis. And we, as a nation, absolutely cannot – and will not – allow any person or persons to introduce into this country, at this precarious time, when it is so easy for nations to topple into social and political disarray, the types of extreme political tactics that had such tragic and tumultuous consequences in Jamaica in the 70’s and 80’s; in Haiti in the 90’s and the early years of the 21st century; and in certain other countries since then.”

In expressing heartfelt regret to the Government and people of Venezuela, and to the Organization of American States, Dr. Douglas said that “as Minister of Finance and as the Minister with responsibility for our security forces, I have placed every resource at the disposal of our Fire Services and Law Enforcement in their determination to establish responsibility for the afore-mentioned acts at the OAS Building and at the Embassy of Venezuela, and to bring them to justice.”