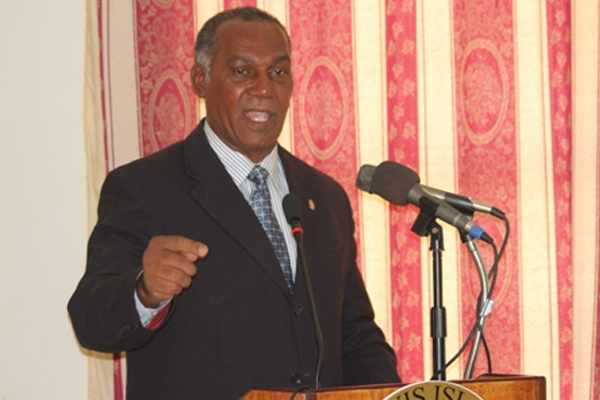 Public Service on Nevis to be structured; inefficiencies removed

(NIA) Charlestown, Nevis – Public Service structuring on Nevis is critical if there is to be a thriving community. Premier of Nevis and Minister of Finance Hon. Vance Amory stated that feat could not be accomplished unless the institutions on Nevis functioned effectively and he vowed to rectify the existing inefficiencies. His comment came when he delivered remarks at the Conference on the Economy 2013, on October 18, at the Red Cross conference room.

The Conference hosted by the Nevis Island Administration (NIA), which was attended by stake holders from across Nevis, was held under the theme “Building the pillars for a strong society, a healthy people and a vibrant economy.” The exercise preceded preparations for the Administration’s annual budget.

“I have come to realize, almost in a state of shock, that there are certain inefficiencies in terms of procedures and policies in the government’s institutions and we need to address those matters. We need to go back to the point where the structure and the system having been established and having been tested over years, must be allowed to work, so that political interferences and political preferences do not become the order of how you run a public system.

“It means that we have to look at establishing the order of seniority, the order of efficiencies and competencies and capabilities which must guide the process. It has nothing to do primarily with political persuasion,” he said.

According to Mr. Amory, it was no secret of the matter of political divisiveness in St. Kitts and Nevis.

“All of us in this room have heard or know of the political divisiveness which has Nevis and St. Kitts. I want, if it’s the only thing that I accomplish this term in government, is to stamp that out and revert to an inclusive approach.

“An approach in the Government Service where it depends on performance, it depends on ability to get the work done, to create things and the ability to manage because those are the things which drive and must drive our economy. So the public service structuring is critical,” he said.