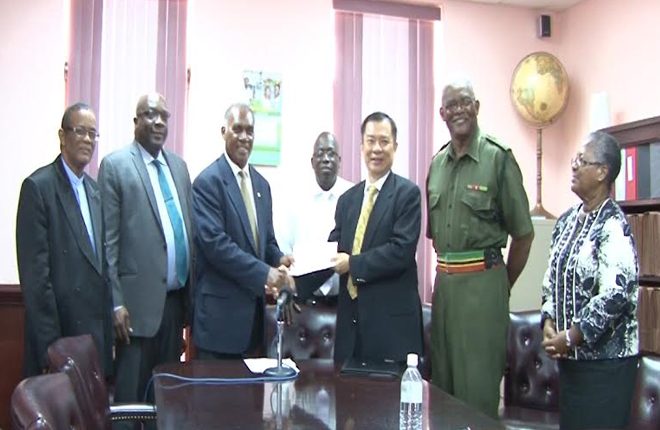 (ZIZ News) — As safety and security in St. Kitts and Nevis continues to be of significant importance, the government of the Republic of China (Taiwan) has facilitated the purchase of new vehicles for security forces in the federation.

His Excellency George Gow Wei Chiou, Resident Taiwanese Ambassador to St. Kitts and Nevis, donated two cheques to the government of St. Kitts and Nevis at a brief but important ceremony on Monday, October 24, at government headquarters. The funds will be used to purchase vehicles for the St. Kitts-Nevis Defence Force.

Prime Minister and Minister of National Security, Dr. Honourable Timothy Harris, expressed his delight to participate in the ceremony and described it as one that was full of symbolism and substance.

“Substance because at this particular juncture, the safety and security of our country remain the primary concern of all law abiding citizens and residents of the country,” said prime minister harris. “And we are delighted at this time when we are asking our security forces to do more to ensure that they deliver on their mandate to make our country safe and secure. Equally, the government is being responsive to their needs by providing them the resources that would assist them in more efficiently and effectively carrying out their mandate.”

Lieutenant Colonel Patrick Wallace, Commander of the St. Kitts-Nevis Defence Force, explained that the donation was important. He described the occasion as momentous, noting that the defence force has been operating a fleet of aged vehicles which afforded it the opportunity to accomplish its mission.

“As a matter of fact our primary vehicles were donated to us by Taiwan some ten years ago and they are still the primary vehicles we are operating with today,” said Commander Wallace. “so it is indeed significant that your country has again stepped up to help our federation. I can assure you that the vehicles your country is donating are not solely for law enforcement but we have as part of our mission – disaster relief and humanitarian assistance. If our country is stricken by hurricane and the defence force is called upon to move people out of distress areas we must have vehicles which can carry adequate numbers to make that move as quickly and as efficiently as possible.”

Ambassador Chiou commended Prime Minister Harris for his commitment to safety and security in the federation.

He further pledged his country’s assistance in areas of law enforcement.

“Recently, the Prime Minister has focused on the [country’s] national security. This is very important not only to the people of St. Kitts And Nevis but also it is very important for the tourism development,” said Ambassador Chiou. “So the government of The Republic Of China (Taiwan) will like to support the prime minister’s policy for national security. We will have a further support to your government and we will like to work with the prime minister to make this country safer and better.”