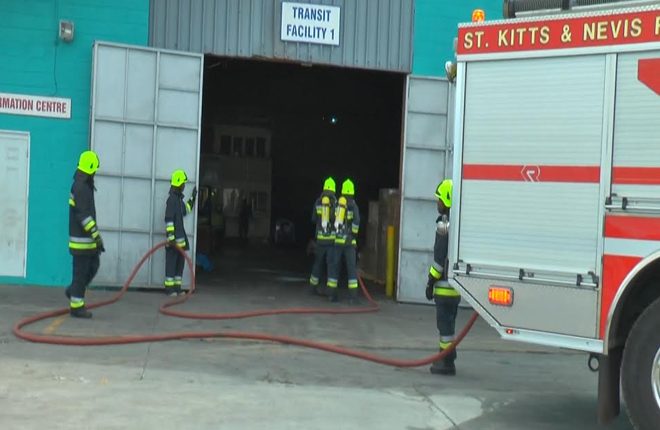 The landline rang twice, a few words were exchanged, the room went silent and the words cue the smoke were announced at around 9:50 am.

The St. Christopher Air And Seaport Authority Emergency Drill Exercise was underway and SCASPA officials, a representative from The Maritime Affairs Department, a NEMA representative and other officials from The Customs And Excise Department huddled in the Security Operations office as they waited for the reactions of unsuspecting workers.

The Emergency Training Exercise used a facility fire at Shed 1 and a Bomb Threat at the Admin Building to engage workers.

Assistant Security Manager of SCASPA, Everette Mason, gave an overview of the Emergency Drill Exercise as it was ongoing.

He explained the purpose for its expansion as another scenario was added to the activity this year.

Mason, who was responsible for communicating with all supervisors and personnel on the grounds and in the administrative offices also noted that he was quite pleased with the outcome of the training exercise.

He was also captured on many occasions making and responding to several calls throughout the exercise in an attempt to maintain a non-chaotic environment.

“I can say from all indications, we have achieved our objective. Our objectives mainly were to test the evacuation procedures and the response time from the responding agencies”, Mason said.

Several Emergency Response Personnel were on the scene including the Police Force’s Bomb Squad Division, The Fire and Rescue Services Department and the Emergency Medical Services.

The activity tested the response mechanisms used by the Air and Sea Port Authority, the response times and methods of the Police, Military and other Emergency Management services.

After the drill was completed, a meeting was held with SCASPA officials, staff and emergency responders to discuss, analyse and highlight observations that were made throughout the exercise.