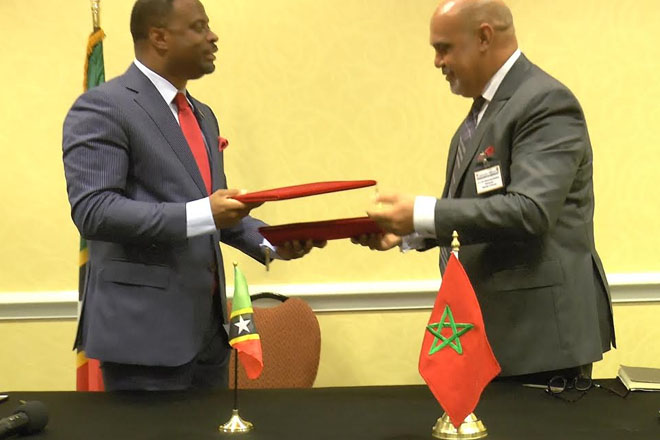 Signing of memorandums of understanding

The first was an M.O.U. between the governments of St. Kitts and Nevis and Morocco to establish a mechanism of political consultation between the two countries and to engage in a cooperation programme in various fields such as education, agriculture, energy and training.

Minister of Foreign Affairs, the Hon. Mark Brantley who signed on behalf of the government of St. Kitts and Nevis said the signing allows for continued dialog and the development of relationships with other countries.

He said, “It creates a framework for ongoing dialogue and discussion at the political level and I believe the people of St. Kitts and Nevis sometimes wonder what these trips are about and what diplomacy is about. I think today we have created a roadmap for ongoing dialog and discussion. When we talk about South-South cooperation, it is our interest in St. Kitts and Nevis to develop closer relations with our partners and develop new relations with new and emerging partners.”

Morocco’s Ambassador to St. Kitts and Nevis his Excellency Mohammed Benjilany pledged his country’s commitment to cooperation with the federation.

“This programme was the first of its kind for both countries and the kingdom of morocco remains committed to the bonds of friendship we established. I am confident that the memorandum of understanding we are signing today will be the first of many to come to highlight the South-South Cooperation in which my country is engaged and to which it is totally committed and which also reflects our strong belief in South-South solidarity,” the ambassador said.

President of the Chamber of Industry, Jose Rosa, signed on behalf of St. Kitts and Nevis.

In response St. Kitts and Nevis Honorary Consul to Belgium, Mehmet Eken said he was honoured to sign the MOU, referring to the Federation as his home.

He said, “This is the first step. Now we must exchange our businessmen, our traders, so it is very honourable for me to be here, to be Honorary Consul of St. Kitts in Belgium but this is my country. My home is your home.”

The two memoranda of understanding were signed on Tuesday following the opening ceremony of diplomatic week 2016.