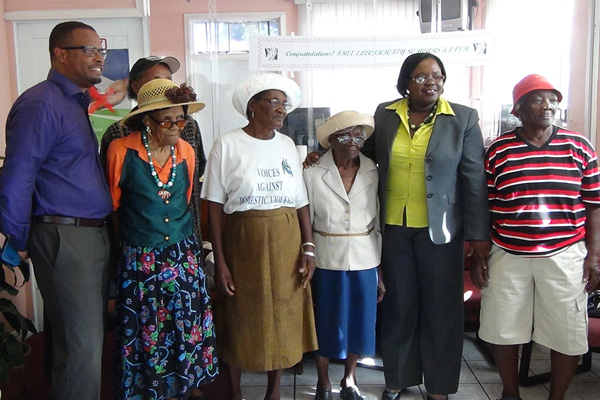 Charlestown, Nevis — A brief but significant ceremony was held at the NEVLEC Customer service office on Monday 14th October.

The ceremony was chaired by Permanent Secretary in the Ministry of Social Development, Mr. Keith Glasgow who indicated in his opening remarks that the ceremony pertained to the launch of the much anticipated free electricity and water for certain seniors within the Nevisian community.

Deputy Premier and Minister of Social Development, Hon. Mark Brantley was elated as he made the grand announcement and noted: ‘It’s a promise made and a promise kept.’ He observed that his party in opposition had made the promise to the seniors of the country and now that promise had become a reality.

He stated that his government met certain programs already in place for the seniors and decided to continue with them and enhance them where possible and also to come up with new initiatives such as this one.

He congratulated the seniors for their outstanding contributions to the community and wished them many more years of enjoying the newly launched incentive. He also pointed out that sixty-eight persons had qualified in the first tier of the program.

Junior Minister in the Ministry of Social Development, Hon. Hazel Brandy- Williams endorsed the sentiments of Minister Brantley and explained that this launch was only pertinent to the first tier of the program. ‘This tier refers to persons 80 years and older but in November we will launch the initiative for persons 70 to 79 years of age and in December, the fimal tier will be launched when persons 65 to 69 will be included in the incentive package,’ she said.

The incentive is directed to older persons within the community who live alone and have no regular source of income, among other qualifying features.

Ms. Gillian Vaughn, Customer Services Manager at NEVLEC, spoke eloquently on behalf of her company and noted that they were very happy to accommodate such an initiative. She also congratulated the seniors for their contribution to nation building.

Mr. Roger Hanley, Manager at the Water Department also fully endorsed the program and opined that he would be very happy to one day qualify for such an incentive. He pointed to the essential nature of water and stated that the seniors deserved the gift that they were receiving.

Five seniors representing the five parishes on Nevis were on hand to witness the launch and Pastor Hazel Harris of St.John’s, served as their spokesperson as she thanked God and the Nevis island Administration for the wonderful gift.

‘I don’t mind the water bill but I was already telling God that the electricity bill is too high and he has done something about it,’ she said.

The vote of thanks was delivered by Mrs. Garcia Hendrickson, the Coordinator at the seniors Division at the Social Services Department.

According to a source at NEVLEC, the seniors will begin benefitting from the incentive this month, even though all of the logistics are yet to be finalized.