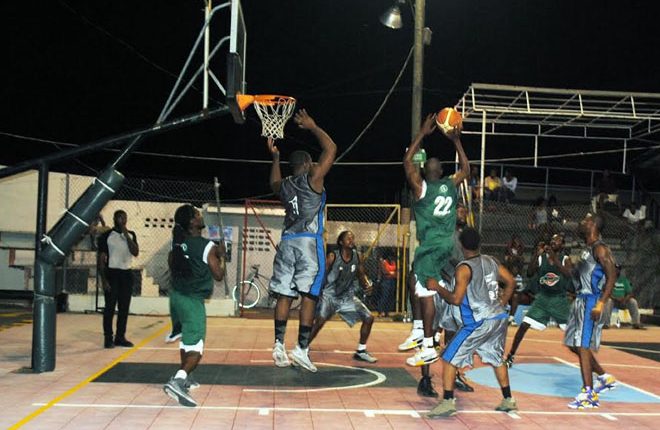 Basseterre, St. Kitts — In front of a small but appreciative crowd, Development Bank Challengers Exodus Basketball Club signalled the fact that they intend to retain the SKNABA Premier League championship for a third year running when they easily dismissed Wolf Pack 80-64 in a clean game played at Basketball CitySunday night April 26.

Even without the services of one of their kingpin players, Taslyn Hodge, and unshaken by the fact that it was a Wolf Pack player who drew the first blood by scoring the first two points of the game which was refereed by Vanessa Parris and Barry Trottman, Exodus players effortlessly turned the tide and in most of the game’s life they were leading Wolf Pack by at least 20 points.

Coach Jamie Harrigan and Manager Roger Gumbs masterminded the game from the benches and occasionally made substitutions, so much so that all the players on the bench were used. At the end of the first quarter they were leading 25-17 following which Sheeno Berridge, who is better known for his exploits on the cricket field, was substituted by Sylvester White.

While playing in the second quarter, and with the score-line reading 31-17 in their favour, Delvin Marshall was substituted by Jamal Sutton, whose basketball-playing father, Ray ‘Mang’ Doyling, was cheering from the side lines. Later, Jamal was joined by his brother Javier Sutton when Ansel Revan rested.

With the game at 42-19 against them, Wolf Pack players employed a new strategy, as they left Exodus players almost flatfooted by quickly scoring eight points in succession to bring the score to 42-27. However, Shawn ‘Shabba’ Forbes used his height advantage to stop the points rush by Wolf Pack players. At half time the score line stood at 47-28.

At the end of the third quarter Exodus led 66-44, and in the final quarter, diminutive Calbert ‘Cali’ Dore of Wolf Pack showed that lack of height was no hindrance to his expertise, as he severally dodged Exodus players as he dribbled the ball right across the court and would end up scoring. By the end of the game he had reduced their deficit from a high of 26 (when they trailed 44-70) to 16 when the game ended with Exodus wining 80-64.

The Sunday game was the third Development Bank Challengers Exodus have won since the 2015 Premier League season opened, having on April 12 edged out St. Pauls’ Tuff Knots 83-81in a close game, while on April 19 they beat Cayon Lions 77-59.

In the second game played at Basketball City on Sunday April 26 St. Pauls’ Tuff Knots dismissed Legends 70-57. Referees for this game, whose half time score was 42-29, were Romel Tobias and Harold Wharton.