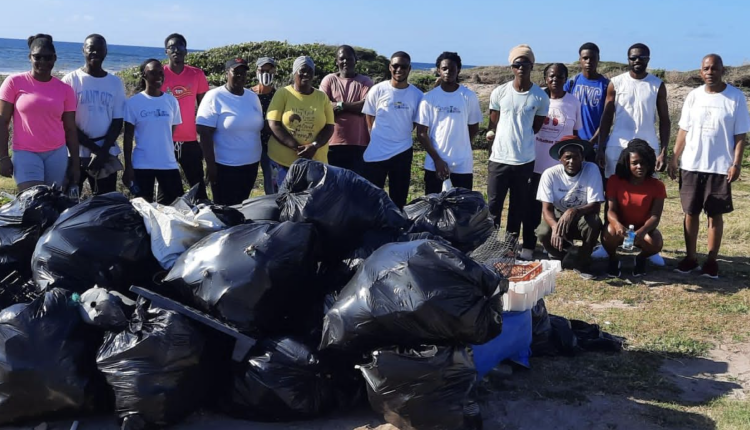 Charlestown, Nevis, March 04, 2022 (Nevis Island Administration) — Hon. Eric Evelyn, Area Representative for the St. George’s Parish is expressing satisfaction with the participation and the results of a month-long clean-up campaign he funded and executed throughout February.

Mr. Evelyn was at the time speaking with the Department of Information on March 03, 2022, about the outcome of the activity.

“I’m very, very pleased with the way things turned out. I am happy with the turnout of persons who came to assist and as I said I think it’s a worthwhile effort, one that was very needed.

The Area Representative explained that the environment’s cleanliness was a key factor for organising the general clean-up event for the area.

“Over the years I have been very concerned about the cleanliness of our country and so as the area representative for St. George/Gingerland, I decided to organise a clean-up campaign in the month of February and I dubbed this clean-up campaign “Let’s clean up,” he said.

For the first two Saturdays in the month, the focus of the clean-up campaign was on white goods. The Area Representative noted that the reason for that was the indiscriminate dumping happening not only in St. George’s but in all of Nevis.

“A lot of the stuff that we dump indiscriminately ends up in the ocean, and then indirectly we take in this stuff through the marine species that we consume, and so I decided let’s do a white goods clean-up so at least persons would have an opportunity to get rid of the white goods,” he explained.

According to Mr. Evelyn, that leg of the campaign went exceptionally well although inclement weather forced them to abort the activity on the first two Saturdays.

However, on the third Saturday, the 19th, he said that an overwhelming amount of white goods was cleaned from the parish during a general clean up in the communities and villages.

On the 26th which was set aside for coastal clean-up in the areas of Indian Castle including Black Bay, Landing Bay and at the Huggins Bay and New River areas yielded more garbage with the assistance of many volunteers.

Mr. Evelyn expressed his surprise at the volume of accumulated garbage on the coastline so soon after a clean-up exercise at Indian Castle in April last year, and another hosted in November by the Nevis Historical and Conservation Society (NHCS). He cited the need for them to be done with greater frequency.

“It shows that there is the need for us to clean up the coastline ever so often, bearing in mind that some of these garbage that we take up would actually end up in the sea. Some of them are actually from the ocean and from neighbouring islands but it is important that we do these clean-ups now and again,” he said.

Among the volunteers were members of the NHCS, the Nevis Turtle Group and other civic minded persons in the community.

Mr. Evelyn used the opportunity to encourage persons to join the effort when activities such as these are organised since the more hands involved the cleaner the communities and by extension the country would be.

He thanked all those who assisted in making the month-long clean-up exercise successful.

“I want to thank all who would have assisted. I want to specially thank the [Nevis] Solid Waste Management Authority for assisting in such a huge way as well, and I want to assure persons that I as the Area Representative for St. George Parish was extremely, extremely pleased to provide this service to you…It was a need that was met for the people of St. George/Gingerland,” he said in conclusion.