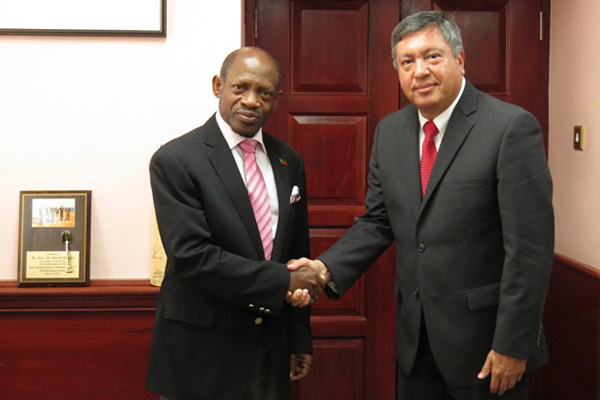 St. Kitts and Nevis and Mexico to increase bi-lateral relations

Mexico has been a longstanding partner of St. Kitts and Nevis and has financed the construction of the Dieppe Bay Police Station already finished and the Tabernacle Police Station, now under construction, both of which were toured by the visiting diplomat.

St. Kitts and Nevis students have benefited from several scholarships granted by the Mexican Government.

Prime Minister Douglas was also updated on the Third CARICOM-Mexico Summit & the Sixth Summit of Heads of State and Government of the Association of Caribbean States (ACS) to be convened under the Chairmanship of Mexico in Merida City, Yucatan, Mexico, from April 29th to 30th.

“The relations between our countries have always been based on respect, cooperation and goodwill. The Government and people of St. Kitts and Nevis welcome H.E. Ambassador Lopez to the Federation and anticipate a productive visit that will redound to the mutual benefit of both of our countries,” the Ministry of Foreign Affairs said.

While in the Federation, Ambassador Lopez paid courtesy calls on Minister of Foreign Affairs, the Hon. Patrice Nisbett; Deputy Governor General of Nevis, His Honour Mr. Eustace John; Premier of Nevis, the Hon. Vance Amory and Leader of the Opposition, the Hon. Mark Brantley.

Ambassador Lopez is a career diplomat and has been working in the Mexican Foreign Service since 1982.

He was first appointed as Ambassador of Mexico in 2012. His recent appointment was that of Ambassador to the OECS on 29th December 2014.  As you will observe from the attached Curriculum Vitae, he has served in several countries in the Americas including the US, Canada, Belize and Haiti.