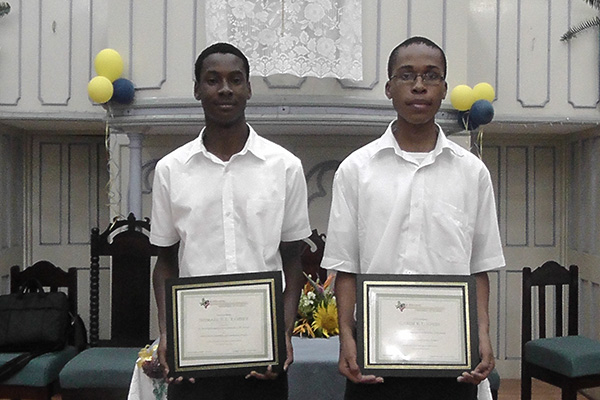 Nicholas Carty was awarded for Excellence in Foreign Languages for earning a Distinction in Spanish with a full ‘A’ profile. Carty attained a total of 8 CXC subject passes.

Garim Jones received the award for Excellence in Agricultural Science for his Distinction, also with an all ‘A’ profile. Jones earned 9 CXC subject passes and is currently enrolled at the Clarence Fitzroy Bryant College (CFBC).

Ishmael Ramsey was awarded for Excellence in Technical & Vocational Studies for his All ‘A’ Distinction in Technical Drawing. Ramsey received 8 CXC passes and is also enrolled at CFBC.

Each student was ranked by CXC as the top candidate in their respective subjects for Basseterre High School. Recipients were presented with a certificate and a US$200 award at the Basseterre High School Annual Speech Day, held on November 20th, 2013. These funds were secured through donations and the fundraising efforts of SKNAH.

The SKNAH CXC Awards project is one of multiple scholarship initiatives spearheaded by SKNAH throughout the year. In September, we awarded three scholarships to Kittitian-Nevisian university students. Jacqueline Bryan, an undergraduate International Relations student at the University of the West Indies – Mona Campus, Jamaica received a US$1000 award. Michael Webb, a Human Resource Development graduate student of Midwestern State University, Witchita Falls, TX and Gayle Jeffers, a Spanish and Portuguese graduate student at Texas Tech University, Lubbock, TX were each awarded US$500. These presentations were made at our 30th Independence Scholarship Gala and Cultural Extravaganza, held on September 28th 2013. During the holiday season we will complete our final scholarship project for this year when we present two barrels of school supplies, arts, crafts and other basic needs items to the Special Education Units both in St. Kitts and Nevis.

Formally established in 2008, SKNAH is a grassroots non-profit organization with the purpose of providing support and enhancing the lives of Kittitians and Nevisians in our Federation and the Greater Houston, Texas area. We are involved in educational, social service programs, volunteerism and keeping our culture strong and vibrant. To learn more about SKNAH visit our website SKNAH.org, find us on Facebook or email us at sknahouston@gmail.com.