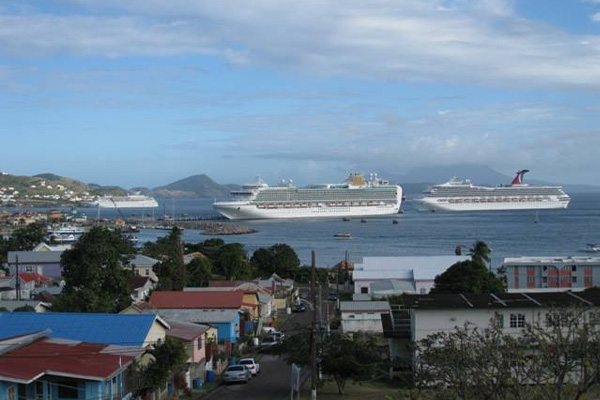 Basseterre, St. Kitts (CUOPM) – A top tourism official in Antigua says that St. Kitts and Nevis is now a leading cruise destination in the OECS.

“However, the country has been surpassed by islands like St. Kitts & Nevis and St. Maarten,” Caribarena reported Dundas as saying.

Dundas said Antigua was one of the first ports to have four cruise ship berths designated to accommodate cruise ships in St John’s.

But vessels, he said, are passing Antigua and going to other destinations.

The Antigua and Barbuda Cruise Tourism Association head pointed out that St Kitts’ cruise tourism industry started in the 1990’s, long after Antigua & Barbuda, yet St. Kitts is predicting 700,000 passengers by the end of the year.

Antigua & Barbuda peaked in 2009 with 711,000 passengers, which showed that we had the capacity to grow, “but something happened along the line in terms of us keeping up that momentum that we built up over the years.”

Dundas said the cruise lines would be coming out with 26 new ships over the next five years, and the country should be ready to benefit from the multi-billion dollar industry.

The Caribbean, Dundas said, has about 40 percent of the cruise tourism market, with Antigua & Barbuda at the top of the game in terms of the numbers and getting and creating opportunities for the people to benefit from the industry.

Dundas said the industry has grown to a great extent over the years with the construction of the four berths and tour operators offering new attraction sites.

Unfortunately, however, according to Dundas, the Antigua and Barbuda did not grow its product as fast as the industry was growing, and other countries took note of what was taking place and capitalized on it.

Another Caribbean destination, the British Virgin Islands said it expects to capture approximately 400,000 passengers for this cruise season.

According to the BVI Ports Authority, during the last cruise season, the BVI was visited by over 359,000 passengers.

With an estimated Fifteen new cruise ships will visit St. Kitts during the 2013/2014 cruise ship season.

Other new ships are the 450-passenger Azamara Quest; the 3,006-passenger Carnival Splendor; the Costa Mediterranea; the 2,076-passenger Legend of the Seas; the 3,013-passenger MSC Musica; the 624-passenger Nippon Maru and the 706-passenger Saga Sapphire;

Minister of Tourism, Sen. the Hon. Richard “Ricky” Skerritt said recently that St. Kitts’ 2013/2014 cruise ship season is going to be exciting with an estimated 785,000 passengers expected from 183 ship days.

“In other words, in a calendar year for the first time in our history we have passed about 130 in terms of ship days. We have gone up significantly by the number of ship days and that means that over the course of 365 days on average, every other day there will be a ship,” said Minister Skerritt.

He also said his Ministry’s strategy has been to go out and do everything to bring business in the summer.

“So the summer ships, we are talking about six months of sailing, which brings business that adds to the numbers and keeps people in business year round,” said Mr. Skerritt.

During this year’s summer of 2013 (May to September) Port Zante, the 3,700 passenger Carnival Valor is making 21 visits, while the 2,500-passenger Jewel of the Seas makes 13 visits.

But according to the 2014 Summer schedule (May to September), four new ships will be joining the Carnival Valor and the Jewel of the Seas.

The Carnival Freedom and the Carnival Breeze will make five calls each, Disney Magic, two and the Nippon Mau, one visit, while the Carnival Valor will make 22 calls and the Jewel of the Seas, 15 calls.

Cruise calls to St. Kitts in the 2011-2012 season brought more than 629,000 passengers to St. Kitts’ Port Zante cruise terminal, up from half a million the previous season.

In addition to increasing cruise passenger arrivals, the geographic markets are expanding, as well, with vessels hailing from the U.S., Canada, Europe, Latin America and the Caribbean.

Annual cruise tourism expenditure also is up, increasing from $6.7 million in 2006 to $70.6 million in 2012, according to a study by U.S.-based research firm BREA. Average per-passenger spends doubled in the same period, to $108.90.