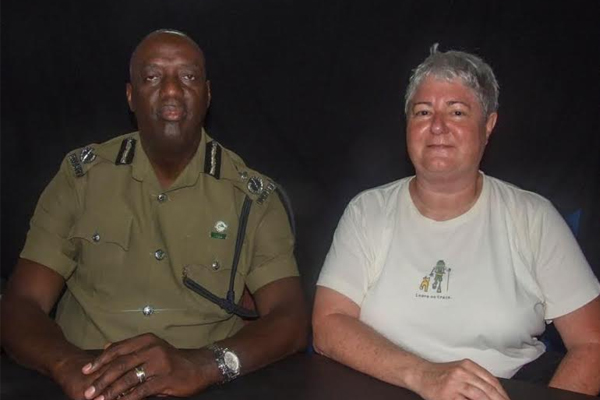 Basseterre, St. Kitts (SKNIS): The Royal St. Christopher and Nevis Police Force is taking steps to improve efficiency which includes a number of policy reforms, modernizing equipment and seeking certification from the Commission on Accreditation of Law Enforcement Accreditation (CALEA).

The effort has been spearheaded by Commissioner of Police Celvin G. Walwyn who leads the High Command in instituting those reforms.

Mary Trude, a retiree from the New Bern Police Department in North Carolina, USA, is an assessor with CALEA. She recently visited St. Kitts on an unrelated stopover and had an opportunity to interact with Commissioner Walwyn who sought her advice on a number of matters.

“Agencies that strive to become accredited want to be the best that they can be,” she stated. “They are using policies and procedures that are tried and proven.” Ms. Trude cited a traffic stop which is one area being looked at locally. She noted that the specified guidelines that govern the top agencies in the world accredited by CALEA, will be used by the RSCNPF if successful in its accreditation bid.

Another area highlighted was the response to emergency events. “Instead of having [different] procedures for a hurricane or procedures for mass arrests or … a nuclear event, you [would] do the same thing,” Ms. Trude explained. “You set up a command procedure – you have communications, who’s going to have the cars. … No matter what type of event you are responding to and that goes under the heading of Incident Command System.”

After the policies are developed and contract signed, the agency will have three years to institute operations under specified guidelines. An independent assessment will then be carried out and if successful accreditation will follow.

There are reportedly 900 agencies in the United States, Canada, Mexico and Barbados enrolled in CALEA’s programmes. These include RSCNPF sister agencies Orange County Sheriff’s Office in Orlando, Florida and Harris County Sheriff’s Office in Houston, Texas. During his tenure at Harris County, Commissioner Walwyn was instrumental in writing the policies that resulted in the department’s accreditation in 1991. He is using that experience in policies drafting for the RSCNPF.

“Once officers know that they have to abide by these guidelines … it should lead to better community relations with the police and better customer service from the police,” explained Commissioner Walwyn. “The force will become more efficient and the citizens will have a more professional police force.”

CALEA was created in 1979 and boasts of having “The Gold Standard in Public Safety.” It is headquartered in Gainesville, Virginia in the United States. Additional information is available at www.calea.org.