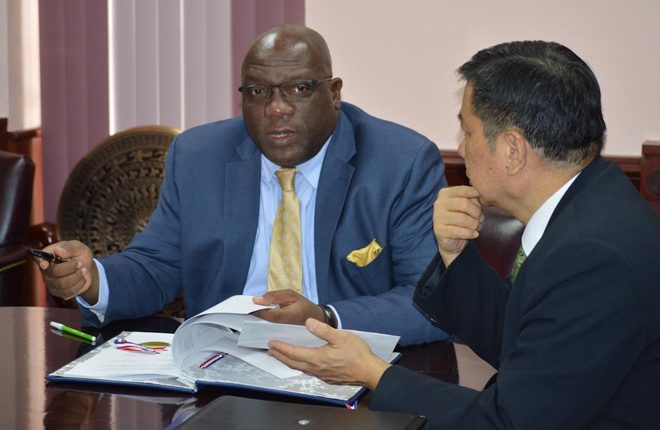 (PRESS SEC) — The Governments of St. Kitts-Nevis and the Republic of China (Taiwan) have entered into a formal arrangement that would see police cooperation between the two countries. This cooperation agreement provides for a law enforcement personnel exchange, to include a technical component and study opportunities in Taiwan.

There was also a handing-over of funds for the Cities and Roadways Surveillance System CCTV Project – Phase One. “This substantial sum of about $5 million, which your government has committed for the purchase of the equipment, etc. required for the operation of the CCTV program, is a huge and invaluable investment,” Prime Minister Harris told His Excellency George Chiou during the handing-over ceremony.

Dr. Harris, the Minister of National Security, added that, “It will go a long way in saving lives, in acting as a [crime] deterrent…and providing certain investigatory resources that the police need at this moment. So, on behalf of the country, I say thank you for this significant support, which is only Phase One of a series of support that we are expecting from your government.”

“Phase One will be covering the Basseterre area, Frigate Bay and its environs,” the Commissioner of Police said, noting that, “This is well-needed, and the support is recognized by the government and indeed by the law enforcement officials.”

Addressing His Excellency George Chiou, Commissioner Queeley then said: “We want to say to you that we will take advantage of this opportunity to help to build out our crime-fighting strategies, and please take back to your government and people our sincerest thanks.”

During a bilateral meeting held on Wednesday, March 16th in Belize, then-President Ma Ying-jeou of Taiwan committed to Prime Minister Harris that Taiwan would collaborate with St. Kitts and Nevis in implementing a far-reaching crime-fighting plan for the Federation.

At the meeting in Belize, it was agreed that the plan would expand the use of CCTV in the hot spot areas for violent crime, increase opportunities for training in the Royal St. Christopher and Nevis Police Force, and implement technological upgrades in order to consolidate information and enhance efficiency.

When the Prime Minister of St. Kitts and Nevis and a delegation were in Taiwan to attend the Friday, May 20th swearing-in ceremony of the new – and first female – President of Taiwan, Her Excellency Dr. Tsai Ing-wen, and her Vice President, Chen Chien-jen, Dr. Harris took the opportunity to visit the Taipei City Police Department’s CCTV Centre.

The Taipei City Police Department credits the comprehensive CCTV program in Taiwan’s capital with dramatically reducing the crime rate there.