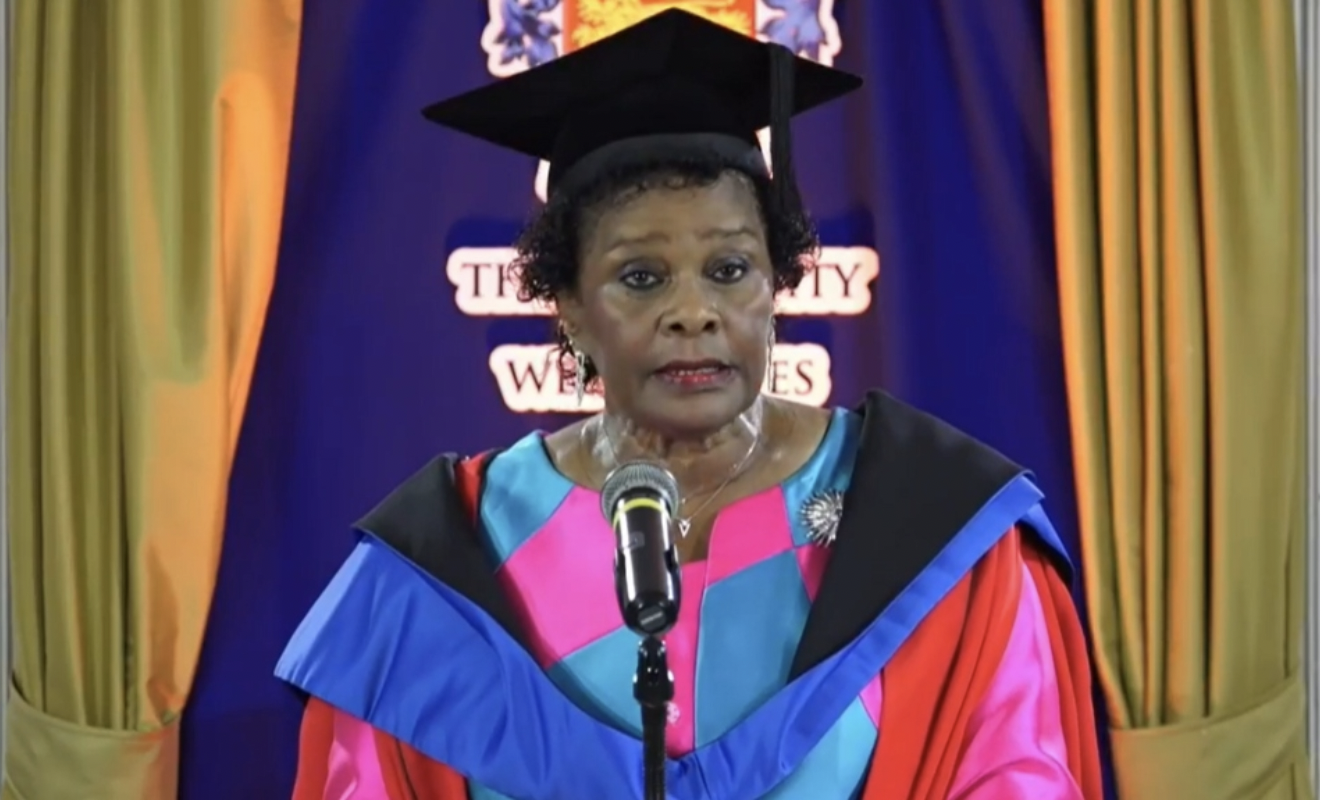 UWI Recognises Dame Sandra For Her Contribution To Public Service

Governor-General Dame Sandra Mason has attributed her present success to her formative years at the University of West Indies.

Dame Sandra made the remarks while at a special convocation ceremony where UWI conferred an honorary Doctor of Laws (LLD) degree in recognition of her contribution to the public service.

The ceremony which was held at the Governor General’s residence was attended by Vice-Chancellor, Professor Sir Hilary Beckles, Principal of the Cave Hill Campus Professor Clive Landis, family, friends, and colleagues.

Dame Sandra was one of the first cohort of students in the faculty of law at UWI Cave Hill in 1970. Since completing her tertiary education she established a successful career, navigating from an attorney, magistrate, judge to head of state. She has also been nominated by Cabinet to serve as the country’s first President for when Barbados transitions to a republic state.

While expressing her gratitude to her family, friends, and colleagues who contributed to her progress, Dame Sandra said she was honoured to be a product of the UWI and part of its initial steps to establishing a Caribbean identity.

The time had come for our people to go further and set about bending the history of the arc of our imposed postcolonial legal tradition, towards a jurisprudence more germane to us as an emancipated people. And it understood in order to do this we could no longer be found loitering on the doorsteps of the legal institutions of our erstwhile colonial masters. I proudly stand here today as a product of that vision and for that, I thank the University of the West Indies,” Dame Sandra remarked during her address.

She added that the graduates owed UWI “an immeasurable debt of gratitude”. Dame Sandra emphasised that she incorporated the university’s core values integrity, excellence, and civic responsibility, and diversity into her life and it helped to propel her career.

“Let me reiterate that we, the graduates of the Faculty of Law, owe this great institution an immeasurable debt of gratitude. In 1986 Mr. [Errol] Barrow spoke of success and if for present purposes we want to equate success with having received our money’s worth and getting to know each other better, then it is indeed a time for rejoicing. But our gratitude is not measured by this or by the mass of book learning that we manage to assimilate. It is more because attendance at the University of the West Indies results in a complete education underpinned by the listed core values which guide the university’s mandate. The values of integrity, intellectual freedom, excellence civic responsibility, accessibility, diversity, and equity. Vice-chancellor the University of the West Indies has once again given me the cause for rejoicing and I am reveling in it,” she stressed.

“What a moment this is. History hurrying to the future. A woman held aloof. A UWI woman from a fine university. A university that is elite but rejects elitism. Our honouree graduate, solid, scholarly and serene. This is an historic moment.”