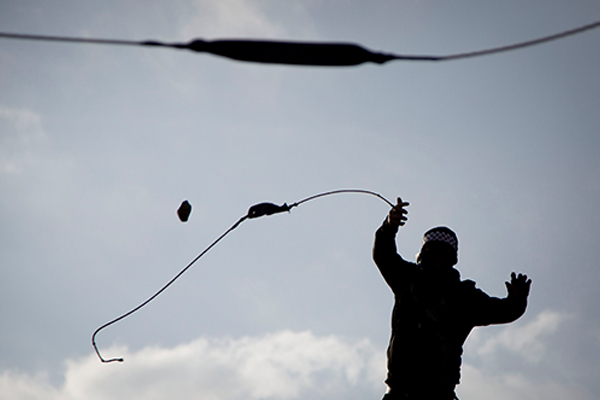 Betin, West Bank (AP) — The fate of a 14-year-old Palestinian girl, tried before an Israeli military court for hurling rocks at passing cars in the West Bank and sentenced to two months in prison, has gripped Palestinians who say her treatment demonstrates Israel’s excessive measures against stone-throwing youth.

Malak al-Khatib, arrested last month, is one of only a rare few female Palestinian minors who have ever faced arrest and sentencing by Israeli authorities.

“A 14-year-old girl won’t pose any threat to soldiers’ lives,” said her father, Ali al-Khatib. “They are well equipped and well trained so what kind of threat could she have posed to them?”

The Israeli military said al-Khatib was charged with stone-throwing, attempted stone-throwing and possession of a knife and that under a plea bargain, she was sentenced to two months in prison and a US$1,500 fine.

Having spent four weeks in detention, al-Khatib has another four weeks left at a central Israeli prison for women.

Out of a total of more than 5,500 Palestinians held by Israel, about 150 are minors, the vast majority of them male, according to official figures from November, provided by Israeli human rights group B’Tselem.

Malak al-Khatib is among a handful of female minors ever held by Israel. Palestinian officials say she is the youngest girl ever detained and sentenced by Israel — a claim Israeli officials and rights groups said they were not able to confirm.

Palestinians and rights groups criticise Israel for its response to rock-throwing, either directed at its forces or civilians. Israel views rock-throwing as a dangerous tactic and at times a life-threatening attack, and claims it can be the first step toward militancy. Palestinians see it as a legitimate way to resist Israel’s occupation.

Israel was hit by a wave of riots by Palestinians in east Jerusalem last year, following the killing of a 16-year-old Palestinian boy by Jewish extremists in revenge for the abduction and murder of three Israeli teens.

Up to 1,000 protesters were arrested, many of them for stone-throwing. Israeli police said many of those arrested were minors. Some of them, schoolbags strapped to their backs, hurled stones at security forces on their way to or from school.

On December 31, al-Khatib walked to a West Bank road used by both Israelis and Palestinians, and began throwing stones at passing cars, Palestinian officials told her parents.

Israeli security forces later arrested her and said they found a knife in her possession.