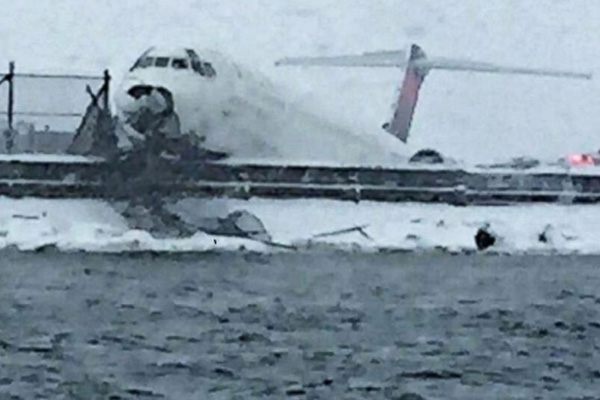 24 injured after Delta plane skids off runway in NY

NEW YORK, United States(AFP) — An airliner skidded off a runway at New York’s La Guardia airport Thursday as a major winter storm battered the United States from Texas to the US east coast.

Heavy snow was falling as Delta flight 1086 from Atlanta slid off the runway, up an embankment and into a fence after landing at around 11:00 am.

A spokesman for New York Fire Department reported some minor injuries. Video of the scene showed passengers climbing out of the plane through an exit over a wing and trudging through thick snow.

It was the most dramatic incident on a day in which a huge winter storm forced thousands of flight cancellations, and disrupted life across a broad swath of the United States.

In Washington DC, government workers were ordered to stay home, schools were closed, and museums shuttered for the day as icy rain turned to heavy snow.

Baltimore, Philadelphia and New York were expected to get as much as eight inches of snow, with wind chill temperatures dipping well below average in much of the region.

Forecasters had warned of low visibility in New York, and some 40 percent of flights had been canceled at La Guardia before the accident there, according to flightaware.com.

“We have all been evacuated. Everyone is safe. Thank you for your prayers. God is good.”

Delta said the 125 passengers and six crew members aboard the plane had disembarked via aircraft slides and were moved to the terminal on buses.

“Our priority is ensuring our customers and crew members are safe,” Delta said in a statement.

The airline vowed to “work with all authorities and stakeholders to look into what happened in this incident”.

The FDNY said on Twitter there was a fuel leak after the McDonnell Douglas MD88 aircraft skidded off the runway.

A Fire Department spokesperson later told AFP the fuel leak was under control.

In a Twitter message, La Guardia airport said its runways were closed and warned travelers to expect cancellations and delays.

In Kentucky, Governor Steve Beshear declared a state of emergency for the state, where some cities were pounded with 20 inches of snow.

Southern United States was not spared — with Texas, Oklahoma and New Mexico all facing weather warnings.

Forecasters said the storm’s scope was out of the ordinary.

“For this time of year, to be impacting people in the relative deep south, it’s a fairly unusual event,” NWS meteorologist Bruce Terry told AFP.

He said southern states, not accustomed to winter conditions, might not be as prepared as some of their more weathered US neighbors.

“They’re not going to be as well-equipped to deal with significant snowfall, as we would back east here and in the northeast.”

Washington and Baltimore were expecting up to eight inches of snow, with temperatures in the capital dropping to 10 Fahrenheit (-12 Celsius) by evening.

“Significant amounts of snow are forecast that will make travel dangerous. Only travel in an emergency. If you must travel, keep an extra flashlight, food, and water in your vehicle,” the National Oceanic and Atmospheric Administration cautioned for Washington and Baltimore.

In New York and New Jersey, forecasters said wind chill temperatures could plummet to 13 degrees Fahrenheit(-10.5 Celsius), with as much as seven inches of snow expected as well.

Forecasters said Philadelphia could also get seven inches of the white stuff, and warned “the snow will make travel very hazardous or impossible.”

Meanwhile, freezing rain, sleet and snow was forecast in Texas, while New Mexico was bracing for “hazardous” conditions later Thursday.

Airports braced for travel chaos, with more than 4,100 flights canceled by Thursday afternoon and more cancellations and delays expected.

The storm was expected to last until early evening, Terry said, but warned cold temperatures were likely to remain.

“It’s going to be this air mass behind this cold front, so again Friday, temperatures will probably be average 20 to 30 degrees below normal,” he said.