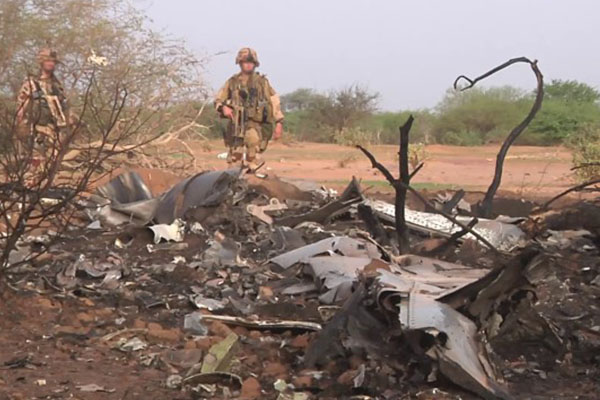 (CNN) — The second flight data recorder from an Air Algerie flight that crashed in Mali has been found, a spokeswoman for the U.N. mission in Mali said Saturday.

A team from the U.N. mission to Mali, known as MINUSMA, is assisting the Malian authorities, at the request of that country’s government, spokeswoman Radhia Achouri said.

There were no survivors of the crash early Thursday of Flight 5017, which took off from Burkina Faso bound for Algeria.

French officials say 54 of those on board were French nationals.

French President Francoise Hollande and other ministers are meeting with the families of French victims Saturday in Paris. They will brief the grieving relatives on what has been discovered so far.

The wreckage was found in what Hollande said Friday was a “disintegrated state” in Mali’s Gossi region, not far from the border with Burkina Faso.

The first data recorder, or black box, was found at the crash site on Friday. The cause of the crash is not yet confirmed but weather may have been a factor.

Less than an hour into the flight, the aircraft, an MD-83, disappeared from radar after changing its flight path because of bad weather, officials said.

The U.N. mission’s support includes logistics, transportation, technical and scientific expertise, as well as help securing the crash site, which is in a remote and inaccessible location.

“Our experts assists the Malians and the French in the search of the site, collecting bodies, providing body bags and in securing the site aiming to speed up the work,” said Achouri.

As part of French efforts to assist, 33 French forensic experts arrived at the crash site Saturday.