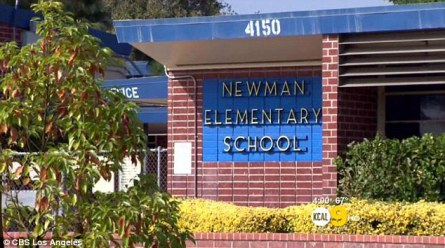 California, United States (AP) — Three children were injured by shrapnel after a fellow elementary school student pulled the trigger of an assault rifle mounted on a police motorcycle during a school assembly, authorities said.

The AR-15 was locked to the side of the motorcycle that was on display at Newman Elementary School on Wednesday during an anti-drug programme when a student managed to fire it, Chino police spokeswoman Tamrin Olden said.

“The bullet disintegrated when discharged by striking a metal plate where the barrel rests against the weapons mount”, and metal debris apparently struck some children and caused minor injuries, she said.

“It is likely that metal debris struck two children resulting in extremely minor injuries,” Olden said, adding that the children were treated at a hospital and released.

A third student was examined at the school and released to parents, she said.

The weapons mount holding the rifle had several fail-safes, including the metal plate, Olden said.

There was no immediate word on whether a police officer was nearby when the accidental discharge occurred.

Rifles have been removed from other police motorcycles while the shooting is investigated, Olden said at a news conference.

The shooting occurred while police visited the school for Red Ribbon Week, an annual national event that features a series of activities designed to raise awareness about drug and alcohol abuse.