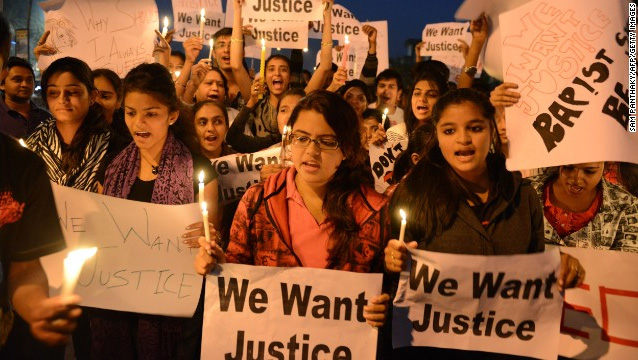 The men have pleaded guilty to the rape charges but have not admitted to killing the girls, police spokesman Mukesh Saxena said Sunday.

All five known suspects, including two police officers, have been arrested, he said.

The police complaint also names two unknown people in the case. Investigations are trying to determine their identity, Saxena said.

The assault on the cousins, ages 14 and 16, sparked outrage in the community in Uttar Pradesh state. After being gang raped, they were hanged from a mango tree, police said.

Villagers streamed into the homes of the girls’ relatives, weeping behind their customary veils. The mother of one of the girls said her daughter wanted to become a doctor to escape grinding poverty.

The attackers, she said, deserved the same fate that befell her daughter.

“Hang them in public,” she said.

CNN cannot identify the relatives or victims under Indian law.

In the northern village where the attack occurred, crowds surrounded the girls for hours after their bodies were found Wednesday. They accused authorities of siding with the suspects and blocked them from taking the girls down from their nooses unless arrests are made.

In addition to possible rape and murder charges, the officers face charges of conspiracy in the crime and negligence of duty after villagers accused them of failing to respond when they first pinpointed the suspects.

An autopsy confirmed that the girls had been raped and strangled, according to authorities. They were cremated the same day the bodies were found, in line with Hindu customs, said Mukesh Saxena, a local police official.

“We are scared,” said Renu Devi, a woman in the village where the attack occurred.

Devi has reason to fear. The girls were out in the orchard relieving themselves Tuesday night when the attackers grabbed them, authorities said.

Toilets are rare in the village, forcing women to wander away into fields in the dead of night.

“There’s no toilet. Where can the girls go?” shouted Jamuni Devi, another woman from the village. “No one has done anything for sanitation.”

Indians have more access to mobile phones than to toilets, according to a United Nations report four years ago.

“India has some 545 million cell phones, enough to serve about 45% of the population,” according to the U.N.

But it also has the highest number of people in the world — an estimated 620 million — who defecate in the open, according to UNICEF.

The lack of indoor plumbing leaves women in rural areas vulnerable to frequent rapes and beatings.

“It is a tragic irony to think that in India, a country now wealthy enough that roughly half of the people own phones, about half cannot afford the basic necessity and dignity of a toilet,” said Zafar Adeel, who chairs the organization U.N.-Water.

Some people saw the abduction but were unable to stop it, police spokesman Saxena said, citing witnesses.

His account echoed that of the father of the older victim, who alleged that a scuffle broke out between a relative and the three brothers suspected of the attack.

“They scared my cousin away with a locally made pistol,” he said.

The daughter he lost was his only child.

The victims’ relatives accused local police of failing to respond and siding with the suspects when the parents reported the case. The allegations have fueled anger among the villagers.

“If police wanted, my daughter would have been alive today,” he said.

This Uttar Pradesh rape is the latest of several that have drawn the world’s attention to India in recent years.

The horrific gang rape and murder of a 23-year-old woman in New Delhi in late 2012 shook India, sparking campaigns against violent crimes against women in the country, the world’s second most populous after China.

The case prompted protests in many cities, soul-searching in the media and changes to the law. But shocking instances of sexual violence continue to come to light.

“Laws can only do so much when you have to end something which is as endemic and as entrenched as violence against women,” said Divya Iyer, a senior researcher for Amnesty International in Bangalore, India.

The country’s new Prime Minister, Narendra Modi, has said he wants to take steps to ensure that women are safe, particularly in rural India. But women’s rights groups have criticized what they say is a lack of specific proposals to tackle the problem, suggesting that gender inequality doesn’t appear to be high on his list of priorities.