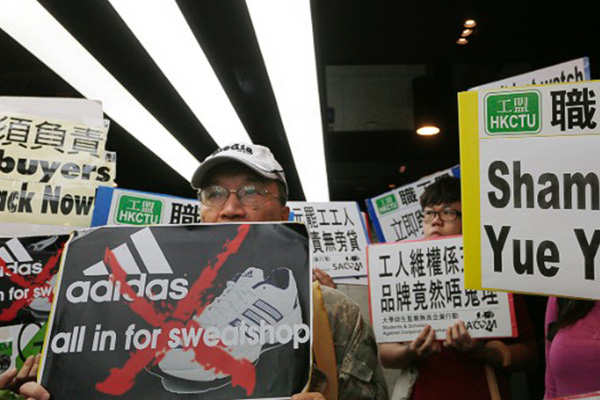 (CNN) — Workers have walked off the job at one of the world’s largest shoe factories, leading apparel maker Adidas to temporarily shift its production.

As many as 50,000 employees are on strike at Yue Yuen Industrial, a major Adidas and Nike supplier in the southern Chinese city of Dongguan. Activists say it’s one of China’s largest worker strikes ever.

“This is a result of the long-term exploitation of this big enterprise,” said Suki Chung, the executive director of Hong Kong nonprofit Labor Action China. “Workers’ demands are very clear.”

Strikers say that they are not being paid the full amount of social insurance and housing benefits owed to them. Additionally, they say their work contracts are fraudulent, preventing them from enrolling their children in local schools.

The factory offered last weekend to recalculate its social insurance and housing benefit payments to workers, but did not offer new contracts. The strikers refused the offer.

Adidas spokeswoman Katja Schreiber said the company was moving some of its future orders from Yue Yuen Dongguan to its other suppliers.

“At the same time, we’d like to point out that we are not pulling out of the Yue Yuen factory in Dongguan and we have no plans to do so,” she said.

Nike spokesman Greg Rossiter said the company was in touch with factory management, but did not say whether the company would move production to other facilities.

Teresa Cheng, an organizer with the International Union League for Brand Responsibility, slammed Adidas for moving some of its orders.

“This is the typical behavior of Adidas,” she said. “Adidas systematically withdraws its orders and moves them to factories with more exploitative conditions, essentially punishing workers who dare to stand up to sweatshop abuse.”

China’s massive manufacturing sector has slowed in recent months, and many companies have shifted production to China’s inland provinces or countries with cheaper labor.

According to Suki Chung, workers in southern China are now worried about long-term job security, leading them to ask for more than just higher wages.

“Workers are in a very insecure position,” she said. “They are paranoid they will lose their jobs. If they don’t fight at the moment, the factory could be gone very soon.”

Zhang Zhiru, a labor rights activist who aided the strike and advised workers, was detained for 12 hours by state security agents Thursday.

“They took my phone and didn’t allow me to contact anyone,” he said. “I think they released me because of outside pressure, saying it was illegal for them to detain me.”

Despite the incident, Zhang vowed to press on.

“I prepared myself to face these sorts of things when I decided to protect the rights of the public,” he said. “If the workers ask me for help again, I will still help them.”