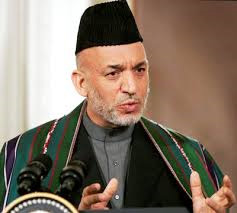 Kabul, Afghanistan (CNN) — Afghan President Hamid Karzai has criticized the timing of the U.S. drone strike that killed the leader of the Pakistani Taliban last week, his office said in a statement.

Karzai made the comments when he met with a U.S. congressional delegation in Kabul on Sunday evening, the statement said.

The Afghan President expressed hope that the death of the Pakistani Taliban leader, Hakimullah Mehsud, would not undermine cooperation between Afghanistan and Pakistan aimed at achieving a successful peace process.

Mehsud, who had a $5 million U.S. bounty on his head for his alleged involvement in a 2009 attack on a U.S. base in Afghanistan, was killed Friday in a drone strike in northwestern Pakistan, senior U.S. and Pakistani officials said last week.

The Pakistani government condemned the use of drone strikes on its territory after Mehsud’s killing. The U.S. ambassador to Islamabad was summoned to Pakistan’s Foreign Ministry on Saturday.

Mehsud’s death happened as Pakistani authorities were working on efforts to hold peace talks with the Pakistani Taliban. There are fears that his killing could jeopardize the proposed talks.

In a different initiative, the Afghan government announced plans last week to send a delegation to Pakistan to meet with Mullah Abdul Ghani Baradar, a former Afghan Taliban leader who was released last month from detention by Pakistani authorities.

The planned visit plays into efforts to pursue peace in war-torn Afghanistan, where NATO and Afghan troops have been fighting the Afghan Taliban for more than a decade.

The Afghan Taliban condemned the drone strike that killed Mehsud as “cowardly” and “barbaric” in a statement posted on their website Saturday, the SITE intelligence group said. The statement urged the Pakistani government and people to take measures to stop the attacks.

The Pakistani Taliban have voted to elect Asmatullah Shaheen, who is on Pakistan’s most wanted list, as their interim head, an official for the group said.

The group, also known as Tehreek-e-Taliban Pakistan, will not be making an announcement on a new permanent leader for several more days, according to Azam Tariq, a member of the Pakistani Taliban’s Shura Council, their centralized decision-making body.