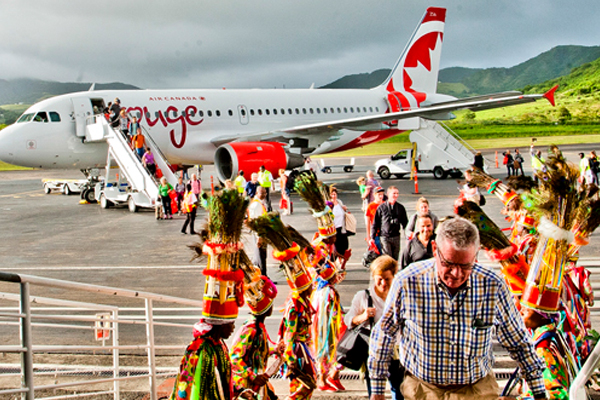 Basseterre, St. Kitts (CUOPM) — Air Canada will resume its seasonal non-stop flights into S Kitts, one of its leisure destinations around the world later this month.

The weekly flight, which previously operated on Monday’ has return to a Saturday schedule.

The weekly flight will commence into the Robert L. Bradshaw International Airport on December 20th.

When Minister of Tourism, Sen. the Hon. Richard “Ricky” Skerritt was successful in bringing Air Canada to St. Kitts in 2011, the Canadian-carrier used the subsidiary Air Canada Vacations.

Air Canada’s website describes St. Kitts as an “an intoxicating blend of natural beauty, sunny skies, warm waters and golden-sand beaches. It is an unspoiled island, recognized around the world for the excellent preservation of its ecosystems and genuinely welcoming people. You can hike its volcanic rainforests, relax on one of its many uncrowded beaches, tour its sleepy villages or stay up late at the beach bars along the Frigate Bay Strip. Whatever your fancy, this seductively charming island has something for you.”