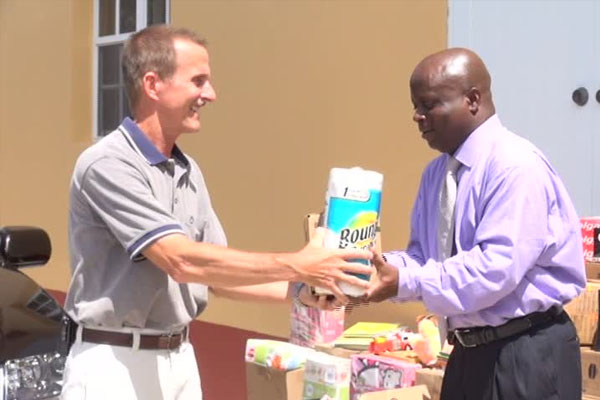 NIA Charlestown Nevis — Two institutions on Nevis were the beneficiaries of donations from American couple Dennis and Linda Thomas, their church, family and friends in Florida on August 07, 2014, a gift received with gratitude and appreciation on behalf of the people of Nevis.

During a brief but significant handing over ceremony on the grounds of the Nevis Island Administration’s offices in Charlestown, the couple who had vacationed in Nevis for the past three years, handed over a donation of toiletries for the inmates of the Prison Farm at Maddens to Permanent Secretary in the Premier’s Ministry Wakely Daniel and some bed sheets, toys and books to Voices of Women for the Paediatric Ward at the Alexandra Hospital.

“On behalf of the Premier’s Ministry and of course on behalf of the people of Nevis, I would like to give our heartfelt thanks to the Thomases, first for choosing Nevis as their home and also for what I call these showers of blessings.

“These items that they have brought here this morning will, of course, add to the comfort and to the wellbeing of the prisoners who are there at what we call the Prison Farm. We are mindful of the fact that they are in prison, yes, but they are also human and of course these items will help with the smooth transition from being incarcerated to re-entering public life,” Daniel said.

In brief remarks, Hospital Administrator Gary Pemberton thanked the American couple for their kind gesture which he stated would aid convalescence of paediatric patients and enhance the appeal of the Paediatric Ward.

Meantime, Dennis Thomas explained how the donation came about. He noted that he and his wife visited Nevis when they were honeymooning in St. Kitts and fell in love with the island and its people and wanted to give back.

“The hearts of the people here are so big and because of that they really just drew us in with their warmth we felt as though God was calling us to have a ministry here.

“As a result of that calling, we reached out to areas that are near to us, near to our hearts, mine specifically for the men in the prisons, not that I have ever been to prison but I’ve made a lot of mistakes and God’s gotten me through these things and I know from first-hand experience, that the men in the prisons, no matter what country they are in, they need to know they are loved. They need to know that there is somebody out there that cares and that’s what I struck out to do,” he said.

He thanked the people of Nevis and St. Kitts for their warmth.

“We thank the people of Nevis and St. Kitts for opening their hearts and their arms to us and this won’t be out last trip. So look forward to seeing us again and you will be in our prayers,” he said.

His wife Linda who has interest in the empowerment of women which led her to partner with the Voices of Women, explained how her end of the donation came about.

“We have reached out to our friends to find out what is, indeed, something that would bless the people of Nevis. So we are just humbled and thrilled that there are these ministry opportunities.

“We are glad to be a part of that but it’s not just Dennis and myself. Our church at home in Florida helped sponsor these donations as well as family and friends. So on behalf of them, we are just the ambassadors. We would just like to thank them and also just pray that these few items of donation will bless others also. So thank you for accepting us. We feel like we are a part of your family and we look forward to coming back again very soon,” she said.

Also present at the brief ceremony were Gweneth Browne and Nicole Lawrence, members of Voices of Women; Principal Officer in Charge of the Prison Farm on Nevis Lawson Crosse and Catherine Forbes who served as chairperson for the event and assisted the Thomases to identify the local charitable causes.