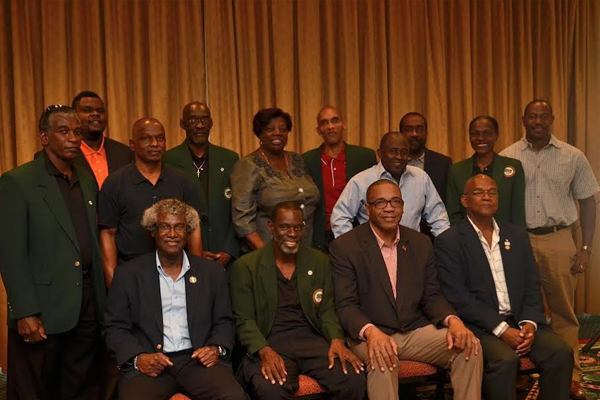 Basseterre, St. Kitts– The Association of National Olympic Committees of the OECS (ANOCES) held the 2014 Edition of its General Assembly on Saturday 5th July between 9:00am and 1:45pm at the Marriott Hotel Resort and Casino Frigate Bay, St Kitts.

ANOCES is a formal grouping (with constitution etc.,) representative of all the National Olympic Committees (NOC’s) and CGAs of the Organization of Eastern Caribbean States (OECS).

According to the President of ANOCES, Alphonso Bridgwater, who is also the President of the St Kitts and Nevis Olympic Committee (SKNOC) and Commonwealth Games Association (CGA) of St Kitts and Nevis, as well as a long-standing Executive Member of the Pan American Sports Organisation (PASO), made reference, in his welcome and introductory remarks, to the “spirit of inclusion which is demonstrated by ANOCES in embracing the involvement of the CGAs of the non-NOC territories of Anguilla and Montserrat”.

President Bridgewater indicated he was “heartened by the level of commitment demonstrated in the participation and representation” reflected in the presence of delegates from the Member Territories—Anguilla, Antigua and Barbuda, The British Virgin Islands, Dominica, Grenada, St. Kitts and Nevis, St. Lucia and St. Vincent and the Grenadines.

President Bridgewater further pointed out that the ANOCES General Assembly and the OECS Track and Field Championships (5th-6th July) will culminate the programme of activities planned for the 2014 celebration of Olympic Day (June 23rd) which commenced on June 22nd.

In his special welcome to Guest Speaker at the ANOCES General Assembly, President Bridgwater extended thanks and appreciation to the Honourable Sir K. Dwight Venner for “his longstanding, quiet, yet sterling support of the national/regional sporting fraternity–both on a personal and institutional level”. Appreciative reference was made of Sir K Dwight Venner’s leadership as Governor of the Eastern Caribbean Central Bank (ECCB) where there is “tremendous support for staff participation and involvement in physical activity and sport” as well as for the institution’s “perennial sponsorship of the OECS/ECCB Under – 23 Netball Championships”.

In the words of President Bridgewater, “it is both sensible and strategic” for the ANOECS to build, nurture and maintain positive and productive partnership with institutions like ECCB and the OECS Secretariat (in St Lucia)”.

By way of conclusion, ANOCES President Bridgewater re-emphasized his commitment to channel ANOCES towards the course which will also focus on “partnerships, autonomy and leadership”. Namely, “building, nurturing and maintaining positive and productive partnerships; respecting the autonomy whilst relishing opportunities for interdependence and collective initiatives; highlighting and modelling effective leadership and best practices”.

The final words of President Bridgewater proved most instructive and seminal: “Central to that focus on partnership, autonomy and leadership, must be the unadulterated priority given to the welfare of the athlete – the fulcrum of all our attention and efforts”.