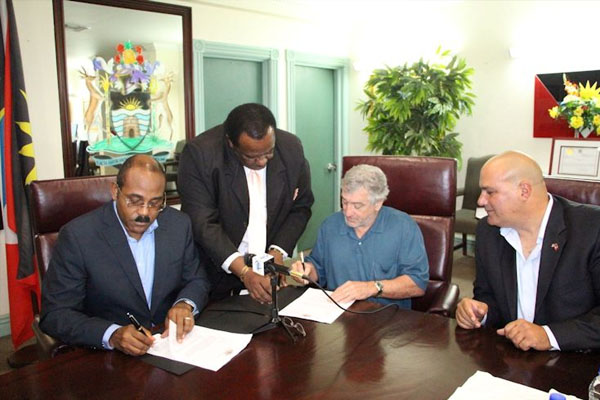 St John’s, Antigua — On Friday, the Antigua and Barbuda government signed a memorandum of agreement for an investment project valued at over US $250 million with international film star Robert De Niro, who was also appointed a special economic envoy for the country.

During a special sitting of the Cabinet, Browne and De Niro, who is a regular visitor to one of Antigua and Barbuda’s most prestigious vacation resort Jumby Bay, signed the MOA giving the green light to the renovation and expansion of the K-Club on Barbuda into an exclusive five-star resort.

“We are indeed very delighted that you will be embarking on a very exciting project on Barbuda, transforming the island, making it one of the most exciting islands in the region. Your project has increased interest in Barbuda. The project is attracting additional investors to our country. That is why I am delighted to appoint you as a special economic envoy of Antigua and Barbuda to attract more investments to our twin island state. It is my belief that your celebrity status will attract more American celebrities to Antigua and Barbuda and the Caribbean,” Browne remarked.

Browne added that Barbuda is a diamond in the rough and will make a net positive contribution to the treasury of Antigua and Barbuda.

“Your involvement in Barbuda shows that you Mr De Niro, Mr James Packer and your team are pioneers and visionaries — recognizing that Barbuda represents a unique proposition for investment, giving you the opportunity to carve out a particular niche.

“My government is very happy to be a part of this historic and significant moment. Your presence as an international celebrity is of significance and to have you as an investor and a friend of the people of Antigua and Barbuda and an economic envoy is equally significant. Today is indeed an historic day for our nation and we are very pleased to have you and your team here and we are hoping that within thirty days we can conclude the deal and construction can begin in the next 12 months providing employment to the people of Antigua and Barbuda,” Browne told the American actor.

The award winning actor who has appeared in over 90 films, including the Godfather Part II and Raging Bull, is also a film director, restaurateur and hotelier. He noted that he is happy and excited to do business in Barbuda and pointed out the project will be unique and “great.” He also thanked Browne and his Cabinet for accepting his team into the Antigua and Barbuda family and pledged not to let the government and country down.

Parliamentary representative for Barbuda, where the project is located, Arthur Nibbs, outlined that De Niro is inheriting a great property as the previous owners were people of class and they will be honoured to know that De Niro has taken over the establishment to renovate and expand under the “Paradise Found” brand. He said Barbudans are anticipating an excellent working relationship going forward.

“We expect this project to be one of the most exciting projects in the Caribbean,” Browne concluded.