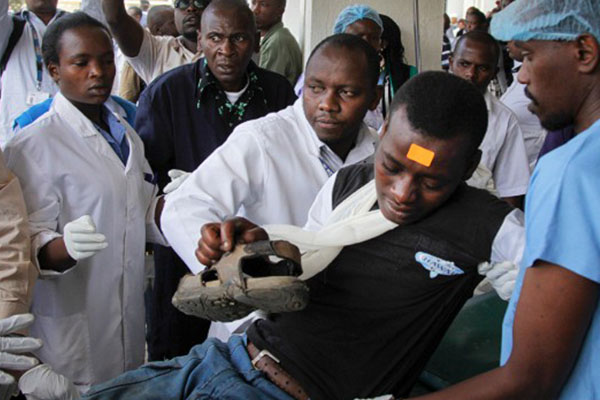 At least 10 dead in explosions in Nairobi, officials say

As many as 70 people were wounded at the Gikomba market, and ambulances evacuated the injured, the Kenyan Red Cross said.

One explosion was reported on a public minibus and the second one at the Gikomba market, the center said.

Two suspects were arrested in connection with the blasts, which were caused by grenades, according to Benson Kibuye, police commandant in Nairobi.

Kenyan President Uhuru Kenyatta expressed his sympathy to those affected by the blasts, the Interior Ministry said via Twitter.

The explosions came after the United States, Australia and UK issued travel alerts for the African nation Thursday.

Hundreds of vacationers were evacuated from Kenya Thursday in response to the alerts, which warned of a “high threat” of terrorist attacks.

“Terrorism is not an evil that was born in Kenya, terrorism is a world wide phenomenon,” the Kenyan President said in his state of the union address. As he delivered that speech Friday, the blasts rocked the central part of the capital.

The Kenyan military crossed into Somalia in 2011 to battle the terrorist group Al-Shabaab, which it blamed for kidnapping tourists in the coastal region. In retaliation, the terrorist group has launched a spate of attacks, including targeting bustling bus stations with grenades.

Last year, militants stormed the Westgate Mall in Nairobi and held shoppers under siege for days. At least 67 people were killed.