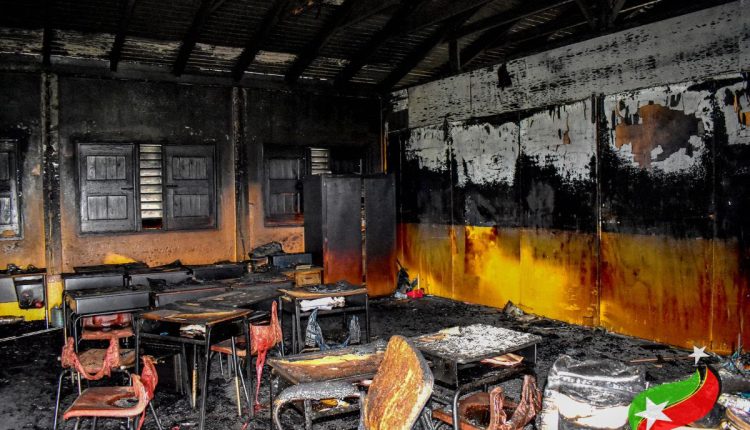 Mr. Morris made this remark during a visit to the fire-ravaged school compound on Tuesday, March 22, 2022, with Prime Minister Dr. the Honourable Timothy Harris.

The acting Chief Education Officer stated that the support from the public since the commission of the willful act has been overwhelming, and this will go a long way in helping to return the school to what it once was.

“This attack is not only on the Joshua Obadiah Williams but on the entire education fraternity in St. Kitts and Nevis. But I want to say that we will bounce back because of the support that we have been given, not only from the community but from the entire Federation. A number of persons have come on board and they are willing to do their very best to make sure that our children do not lose too much of their learning, and so I am happy for that from an education standpoint,” Mr. Morris said.

He stated that it was very fortunate for the Ministry of Education that a facility, in the Explorers Youth Clubs Headquarters, was available close by that was large enough to house the teachers, students and support staff.

He added, “It’s a good thing for us because in crises we need to keep the entire team together, and so we’re happy that we were able to find a facility that allows for that.”

Mr. Morris also indicated that as part of the healing process, the students of the Joshua Obadiah Williams Primary School have been going through a number of counseling sessions.

Meanwhile, the Director of the Public Works Department, Mr. George Gilbert, described the damages caused by the fire as extensive, with major destruction to the ceiling, walls and doors.

“So, what we have to do is to remove the windows, doors and roof and we have to replace them with new material. We have to now upgrade the whole structure, the electrical in particular, and what I’ve seen and observed is that there has been some structural cracks in the building. We don’t know if those were there before or as a result of the fire but those will have to be addressed in going forward. We saw that the plaster work on the walls in many areas are flaking so we have to address that as we go forward too,” said Mr. Gilbert.

While no timetable for the full restoration of the institution can be given at this time, Mr. Gilbert stated that, “we are going to fast track it and we are going to turn it round in the shortest possible time.”

Evidence collected at the scene have led authorities to the conclusion that the fire that destroyed the school was deliberately set.