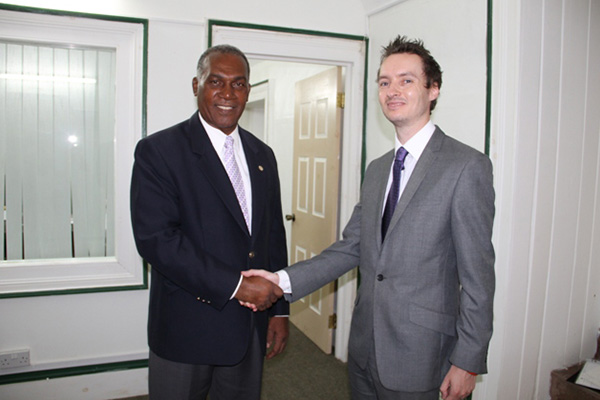 Nia Charlestown Nevis — Martin Robinson, Head of Political, Press and Public Affairs at the British High Commission in Barbados paid a courtesy call on Premier of Nevis at his Bath Plain Office on April 30, 2014 and according to him, their meeting was excellent.

In brief remarks, Robinson told the Department of Information moments after he emerged from the meeting about his visit.

“I am here from the British High Commission and three priorities of the Commission are always security, prosperity and consular.

“We have been having lots of good discussions on the prosperity side for possible opportunities for British businesses and I have also been talking with our Honorary Counsel Sarah Percival, about our British nationals and about British visitors to the islands,” he explained.

Meantime, during their parting greetings, Premier Amory assured Robinson that the British High Commission could expect a response with regard to an invitation for British scholarships.

After the meeting with Mr. Amory, Robinson left Bath Hotel for a meeting with the Police for discussions regarding the security situation on the island.