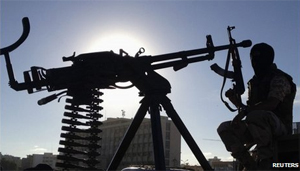 (BBC) Masked gunmen have shot dead a Libyan military police commander in the city of Benghazi, officials have said.

Ahmed al-Barghathi, the head of the military police’s investigative division, was shot several times as he left his house for Friday prayers.

No group has admitted carrying out the attack.

Many security officials have been targeted by gunmen since the end of the 2011 war that toppled Colonel Muammar Gaddafi’s government.