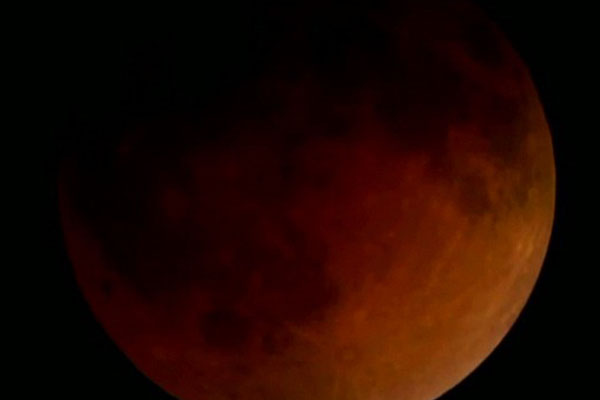 Los Angeles (CNN) — Sky gazers caught a glimpse of the “blood moon” crossing the Earth’s shadow Tuesday in all its splendor.

The moon took on a reddish hue as it appeared in different phases between 2 and 4:30 a.m. ET.

In North and South America, where the blood moon was most prominent, observers pointed at the spectacle with binoculars, telescopes and cellphones.

Depending on time zones, it started late Monday night or in the wee hours of Tuesday morning. Showers and clouds rendered it a bust in some cities, including Atlanta.

In Los Angeles, the chance to view the total lunar eclipse lured thousands to the Griffith Observatory. Families spread out blankets on the grass to take in views from dozens of telescopes set up like a stand of small trees.

Cameras clicked while watchers cheered and pointed at the blushing moon.

“It’s energizing. Look around. Everybody is here to see something rare and live,” said Gene Ireland, who teaches astronomy to middle school students.

Ireland encouraged those who reached the hilltop observatory grounds to peek through his 12-inch Dobsonian reflector telescope.

“Everyone is always looking down at their phones, their iPads,” he said. “We want them looking up. Looking up, you see a whole different world. Getting away from the cities and traffic, and the sky is just beautiful.”

In a total lunar eclipse, the full moon turns a coppery red as it passes into Earth’s shadow. During the process, the moon’s bright glow dims, taking on a red hue because of shimmers of sunlight and sunsets seeping through the Earth’s atmosphere.

Dust and sulfur dioxide in the Earth’s atmosphere can affect the size of the shadow. The moon has to be full for the total lunar eclipse to occur.

As more of the moon emerges from the shadow, its red tint fades as it gets lighter and transitions to its normal silver color. The entire reddening process takes about an hour.

In Tuesday’s spectacle, clouds hid the view from half of the United States, but cities such as Dallas, Denver and Los Angeles had optimal, front-row seats.

“Woke up in just enough time to see half of the blood moon,”tweeted LaTara Hammers of Columbia, Missouri. “It’s so cool how the universe works.”

South and North American residents watched the entire spectacle, while observers in the Western Pacific caught the second half of the event. Central Asia and some parts of Europe and Africa didn’t see much — the moon was setting in most of those continents during the eclipse.

“You know what’s even weirder than the ‘blood moon’? The entire solar system and how amazing it perpetually is always while we barely notice,” Johnny Argent tweeted.

‘A chance arrangement of gravity’

Ed Krupp, director of the observatory, described it as a “typical copper red” total lunar eclipse.

Though rare, it’s the sky “conspiring into a special event” that helps draw crowds, he said.

“The fact that there are four lunar successions coming this year and next … is unusual,” Krupp said. “But it’s not the kind of thing astronomers get worked up about. It doesn’t really mean anything. It’s a chance arrangement of gravity and the motions of objects in the solar system, primarily the Earth and moon.”

Unlike solar eclipses, lunar eclipses are safe to view with the naked eye and don’t require special filters.

The rare sight and was virtually unheard of a few centuries ago.

Before the 20th century, there was a 300-year period when there were no blood moons, said Fred Espenak, a NASA eclipse expert.

“The most unique thing about the 2014-2015 tetrad is that all of them are visible for all or parts of the USA,” he said.

If you missed it Tuesday, there will be more opportunities.

North America will see a blood moon four times — known as a tetrad — between now and September of next year. In addition to Tuesday, it will make another appearance on October 8 of this year, and April 4 and September 28 of next year.