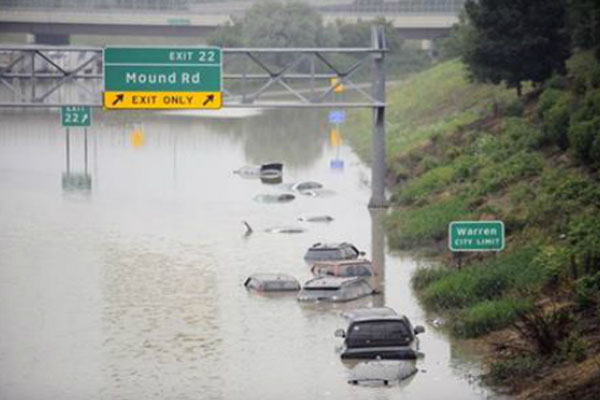 WARREN, Michigan (AP) — The body of a 100-year-old suburban Detroit woman was found in her flooded condominium basement Tuesday, a day after heavy rain swamped much of the area and stranded motorists on water-clogged streets and freeways.

The woman’s daughter was concerned about her welfare and went to the home to check on her, said Warren Mayor James Fouts.

Fouts said the woman appears to have drowned. A cause of death was not immediately available, and Fouts did not release the woman’s name.

Her death was the second blamed on storms that dumped 5.2 inches of rain on Warren on Monday. A 30-year-old woman suffered seizures and died after her vehicle became trapped in high water.

Roughly 1,000 vehicles had been abandoned in floodwaters in the suburb where many roads were closed.

Fearing more drivers could become stranded after a storm dumped more than 6 inches of rain in some places in and around Detroit, the state warned commuters against driving in affected areas Tuesday morning.

Tiffany Gatewood said Chrysler’s Sterling Heights Assembly plant near Warren sent her and other workers home early Monday night. On her way home, Gatewood’s Jeep stalled on a flooded entrance ramp to Interstate 696 and she had to swim to safety.

“I’ve never seen anything like this,” the 27-year-old said. “It’s like the world is coming to an end.”

Warren Fire Chief David Frederick said bystanders pulled a Sterling Heights woman from her car after seeing her suffer seizures. They carried her into a nearby business and called firefighters who waded through chest-deep water to get her to an emergency vehicle. She was pronounced dead at a hospital, Frederick said.