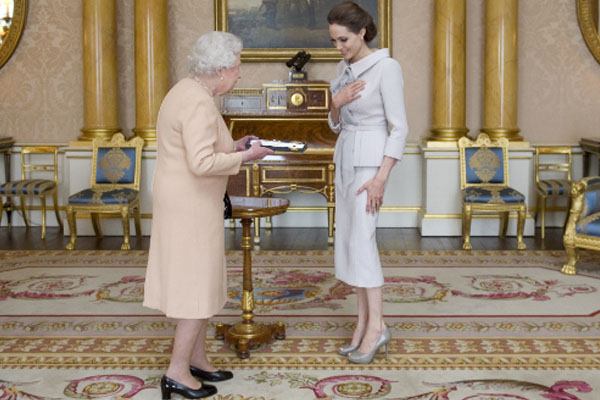 London (AFP) — The American actress Angelina Jolie was made an honorary dame for her work combatting sexual violence by Britain’s Queen Elizabeth II at London’s Buckingham Palace on Friday.

The star of such Hollywood films as “Tomb Raider” and “Maleficent” was made an Honorary Dame Grand Cross of the Most Distinguished Order of St Michael and St George, which recognises her close work with Britain’s Foreign Office.

The pair hosted a four-day global conference in London on the issue, during which US Secretary of State John Kerry suggested that Jolie’s most lasting role might be as a “fierce and fearless advocate”.

Jolie’s honorary damehood, presented to people “who render extraordinary or important non-military service in a foreign country”, was announced in the Queen’s June birthday honours.

At the time, the 39-year-old actress said: “To receive an honour related to foreign policy means a great deal to me, as it is what I wish to dedicate my working life to.

“Working on the Preventing Sexual Violence Initiative and with survivors of rape is an honour in itself. I know that succeeding in our goals will take a lifetime, and I am dedicated to it for all of mine.”