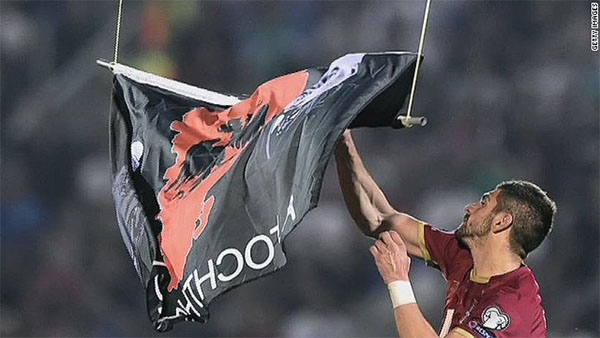 (CNN) — It’s a plot twist that even a thriller writer might have struggled to come up with during Serbia’s European qualifying clash with Albania in Belgrade.

A drone flying a flag depicting the “Greater Albania” over a major international soccer game Tuesday was being controlled by the brother of the prime minister of Albania, who was at the game, a Serbian official told CNN Wednesday.

A Serbian player grabbed the flag, and the incident led to a brawl including players and fans who streamed on to the field. The game was abandoned after 41 minutes.

Albanian players ran from the field, while a number of missiles and flares were thrown from the stands by some home supporters. Images from photo agencies showed fans had invaded the pitch.

The brother was arrested and sent home to Albania, the Serbian prime minister’s office told CNN earlier on Wednesday.

The Albanian government has yet to respond to CNN’s request for comment.

Its Prime Minister, Edi Rama, is scheduled to arrive in Belgrade in the next few days — the first such visit by an Albanian leader in 68 years.

In a statement on its website, UEFA said that the match “was abandoned and the circumstances will be reported to the UEFA Control, Ethics and Disciplinary Body.”

UEFA spokesperson Pedro Pinto told CNN an announcement on sanctions against both countries are expected to be made within a week.

Albania’s first visit to Belgrade since 1967 was expected to be a tense occasion, though the events of Tuesday evening appeared to catch security authorities by surprise.

The “Greater Albania” insignia, which was attached to the drone, refers to the idea of an extended area in which all ethnic Albanians reside — one which would include Kosovo.

The two illustrated figures on the flag were Isa Boletini, an Albanian nationalist who led uprisings against the Serbs and Ottomans in 1912 and 1913, while the other, Ismail Qemali, is considered to be the founder of the modern Albanian state, which became independent in 1912.

The word “Autochthonous,” which refers to an indigenous inhabitant of a place, was emblazoned at the bottom of the flag and is considered an offense to Serbians.

When Serbian player Stefan Mitrovic ripped the flag down, it provided the catalyst for an already combustible tie to fully ignite.

Albanian players ran from the field, while a number of missiles and flares were thrown from the stands by some home supporters. Images from photo agencies showed fans had invaded the pitch.

Martin Atkinson, the English referee, took the players off the field with the game goalless.

“What happened is something we can’t comprehend at the moment,” Serbia captain Branislav Ivanovic told reporters following the abandonment.

“On behalf of my team, all I can say is that we wanted to carry on and that we shielded the Albanian players every step of the way to the tunnel (after the riot broke out).

“The Albanian team said they were unfit physically and mentally to carry on after talking to the officials and they will now decide the fate of this match.

“We can only regret that football took a back seat but it is difficult to draw any conclusions or make any comments now.”

Security had been tight in the lead up to the contest in Belgrade with away fans prevented from attending amidst heightening tensions over Kosovo — a majority-Albanian former Serbian province which declared independence in 2008.

In 1999, a 78-day air war was launched by NATO to stop the killing off ethnic Albanians in Kosovo by Serbian forces.

Kosovo’s independence is recognized by many countries including the United States, the United Kingdom, Germany and France — but not Serbia.

With Kosovo not recognized as a state by the United Nations, it is unable to join FIFA or UEFA, meaning some of its players have adopted other countries.

Xherdan Shaqiri, who plays his club football with Bayern Munich, represents Switzerland as does Valon Behrami and Granit Xhaka.

While Kosovo is able to play friendly matches, the team cannot compete in international competition.

Belgium-born Adnan Januzaj, one of the most exciting talents in the English Premier League with Manchester United, turned down the opportunity to play for Kosovo, where his father is from. He was also eligible for Albania through his mother’s lineage.

“We came to Belgrade to play football, but we were physically attacked by the Serbian supporters,” Cana told reporters on Tuesday.

“We just wanted to take the flag, and everything would be under control if the stadium security at the stadium had prevented the supporters from attacking our players.

“I was defending my teammate, I have injuries to my face, as does Taulant Xhaka. They asked us to play in front of empty stands (instead of abandonment) — however, we did not feel good because of our injuries.”

The two countries must now wait for UEFA to make a decision on whether the game should be replayed. and what punishments are handed out.

“It is a regretful situation on which we will report; the referee, myself and the security adviser. The circumstances were such that we couldn’t continue the match,” UEFA’s match delegate, Harry Been told reporters.

“You all saw what happened and I cannot comment on who is to blame or what to blame. I will submit a report with my colleagues to UEFA and UEFA will decide what will happen further.”