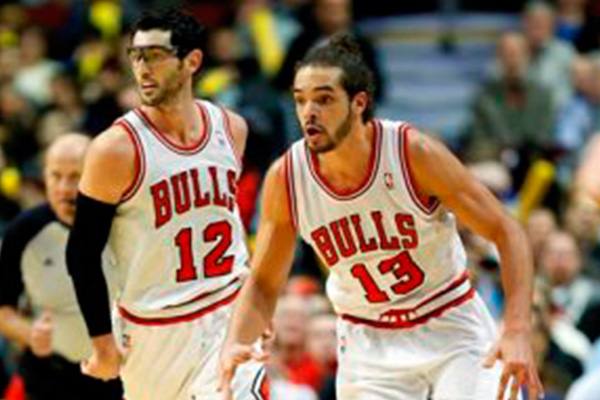 Chicago (AP) — The Chicago Bulls are missing four starters for Tuesday night’s game against the Milwaukee Bucks after Joakim Noah was sidelined by a bruised right thigh.

Noah participated in the morning shootaround and coach Tom Thibodeau did not mention the injury during his pre-game availability. But the Bulls announced the thigh problem a short time later.

Noah is averaging 9.4 points and a team-high 8.8 rebounds. He started each of Chicago’s first 18 games.

Derrick Rose is likely out for the season after right knee surgery, making Carlos Boozer the only starter against Milwaukee who also started on opening night at Miami.

“It’s the nature of the league,” Thibodeau said before Noah’s injury was announced. “Sometimes you’re fortunate where you have good health and move forward like that. Other times you take on injuries and then other guys have an opportunity to step up and oftentimes you find somebody that does a great job for you.”

A spokesman for the Bulls said he thought Noah came down with the injury during Saturday night’s 92-75 home loss against Detroit. Noah had two points on 1-for-7 shooting and nine rebounds against the Pistons.

The match-up with Milwaukee was the first in a stretch of four games in five nights for Chicago.

“You deal with it as it comes,” Thibodeau said when asked if he was concerned about his short rotation. “We feel good about the guys that we do have. We’re going to need everybody. Hopefully we’ll get some guys back soon.”

Nazr Mohammed started in place of Noah. Kirk Hinrich and rookie Tony Snell got the start at guard, and Mike Dunleavy was alongside Boozer and Mohammed in the front court.

The Bulls had nine healthy bodies and Milwaukee was set to play with 10. Bucks guard Gary Neal is out with plantar fasciitis in his left foot and did not make the trip to Chicago.