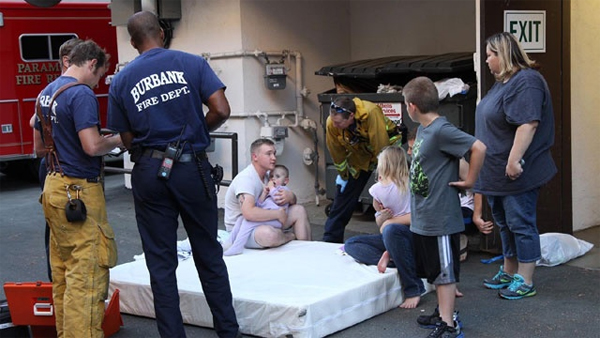 Los Angeles (CNN) — It’s the stuff you might expect only to see on TV or in movies — the upbeat kind with happy endings.

Thankfully, that is just what happened in Burbank, California — the Southern California city that’s home to Warner Brothers and Walt Disney studios — as a toddler fell from three stories up into a stranger’s arms and onto a box spring mattress.

“It feels like I watched a TV show, like it didn’t happen to me,” Konrad Lightner, who identified himself as the man who caught the child and fell with him, told CNN affiliate KABC.

Sunday was moving day for Lightner and wife Jennifer, a typically exhausting if not momentous endeavor.

Until, that is, they spied a youngster hanging out of a third-story window of an apartment building and called 911.

According to Burbank fire Capt. Peter Hendrickson, calls for help came shortly after 5:30 p.m. (8:30 p.m. ET), after witnesses saw the child crawling out of the window.

It was placed under the window, and although Hendrickson did not name the Good Samaritans, the Lightners said it was their mattress and Konrad Lightner’s arms that came to the rescue.

The toddler fell only to be caught, and together the toddler and the catcher fell onto the box spring.

Jennifer Lightner told KABC that the whole episode “didn’t seem real until he was hanging from (a) chord, because there was no way he was going to get back.” It was then, she added, that the couple threw down their box spring mattress.

“It (was) now up to Konrad to catch him,” Jennifer Lightner added.

That’s exactly what Konrad Lightner said he did, putting his arms around the falling child “and lower(ing) him real fast to the box spring.”

Photos taken a short time later and posted on MyBurbank.comshowed a man — clad in a T-shirt, shorts and no shoes — cradling what appeared to be his child on the box spring. Another shows the same man carrying the child, surrounded by toys like Minnie Mouse and SpongeBob SquarePants dolls and as Jennifer Lightner holds the box spring upright.

The youngster appeared to be dressed in footsie pajamas, with no signs of trauma or obvious injuries.

The child was transported to Children’s Hospital Los Angeles, said Hendrickson of the Burbank fire department.

Another photo shows a firefighter helping the Lightners carry away their box spring, and one pictures Konrad Lightner being thanked by a firefighter.

Jennifer Lightner described the happening as “very surreal,” all the more so considering the couple resumed the mundane task of moving not long after.

“I’m not a hero,” her husband told KABC. “I just walked by and just tried to help. Just something happened and were there.

“We were lucky to be there.”