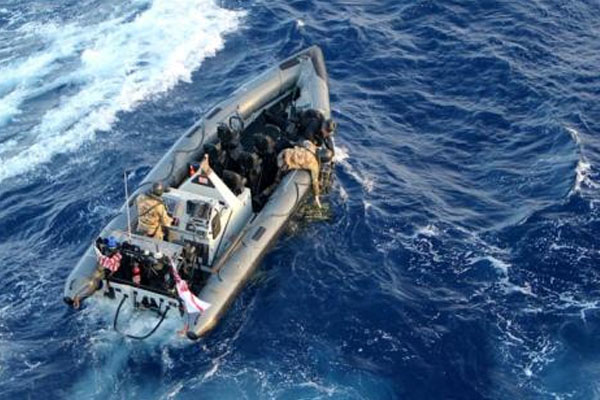 Caribbean drug busts result in seizure of $35 million of cocaine

While on a routine patrol, a Joint Interagency Taskforce South maritime patrol aircraft crew detected a go-fast vessel south of Haiti heading north at 15 knots with fuel barrels and possible contraband on board. Watchstanders from the Coast Guard 7th District Command Center directed the Argyll to intercept and conduct a boarding of the vessel. The go-fast began to jettison objects and the Argyll launched both of their smallboats. Shortly after, the go-fast vessel with four suspected smugglers aboard, became compliant and was boarded by a US Coast Guard law enforcement team.

The Argyll crew recovered 29 bales of contraband the suspects jettisoned into the water. All bales later tested positive for cocaine. The smuggling vessel was destroyed as a hazard to navigation.

In a separate case, the Coast Guard LEDET and crew of the Argyll teamed to seize 216 kilograms of cocaine worth an estimated wholesale value of $7.1 million after a Dutch maritime patrol aircraft detected a suspect go-fast and vectored the Argyll to the vessel’s location, November 23. The go-fast vessel was stopped and two suspects were taken into custody. The contraband was offloaded in Mayaguez, Puerto Rico, on Tuesday.