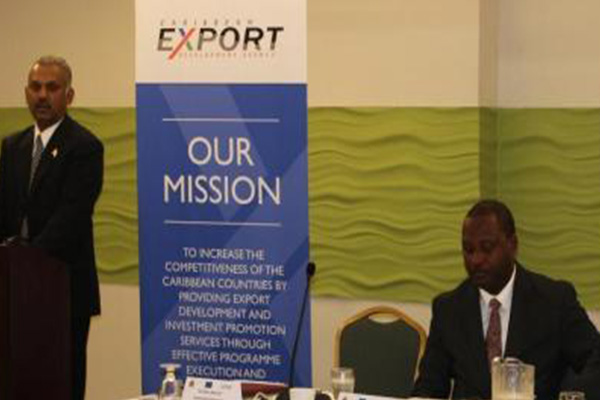 Bridgetown, Barbados — The Caribbean Export Development Agency (Caribbean Export) in collaboration with the government of Barbados convened a meeting on the financial services sector in CARIFORUM on Monday.

The meeting of ministers with responsibility for financial services and key industry professionals was assembled to develop the strategic direction relating to the continued development of the industry, to develop recommendations relating to the governance structure of the regional initiative, and to determine the strategic engagement of the overseas countries and territories in the overall process.

Chaired by Donville Inniss, minister of industry, international business, commerce and small business development, Barbados, the meeting was convened within the context of the importance of a vibrant financial services industry to the sustained economic development of the region, and the severe challenges facing that industry in light of the global economic crisis.

In particular, the Organization for Economic Cooperation and Development (OECD), in which the European Union (EU) plays a key role, has continued to express concerns about the status of regional jurisdictions. Moreover, CARIFORUM countries remain cognizant of commitments to cooperate on finance issues outlined in the CARIFORUM-EU Economic Partnership Agreement (EPA) especially as it relates to tax policy and administration.

In the opening address, Inniss noted that the financial services is the second largest contributor to GDP in the Caribbean, represented by 17% GDP, and stressed that “when it comes to IFCs we have no more time to waste. This sector is way too important to our economies and societies”.

Caribbean international financial services centres (IFCs) have come under increased pressure and scrutiny through a number of developed country led initiatives such as the Foreign Account tax Compliance Act (FATCA), anti-money laundering standards, tax base erosion and profit shifting and exchange of information standards. Many of these initiatives have been driven by the desire to stem the perceived leakage of tax revenue from developed states to the region. As a result, several countries known as tax havens have had to either shut down their financial centres or implement a number of measures to continue to access bilateral aid.

Rudranath Indarsingh, minister of state in the ministry of finance and the economy, Trinidad and Tobago, during his opening remarks stated that despite Trinidad and Tobago’s current dependency on the export of hydrocarbon products, they have “intensified efforts to diversify the economy, identified the financial services industry as an attractive and rewarding venture. In this regard, Trinidad and Tobago has signaled the re-launching of the international financial centre by building a financial institutions support services (FINeSS) industry.”

Moreover, “Trinidad and Tobago is working assiduously in finalizing the Model Intergovernmental Agreement (IGA) process before December 31, 2013. Once signed, all Foreign Financial Institutions (FFIs) would automatically be FATCA compliant and included in the appropriate list to be published in December.”

Executive director for Caribbean Export, Pamela Coke Hamilton, emphasized, “As the global economy evolves, and CARIFORUM States continue to strive for more meaningful integration into the world economy, they will continue to be faced with many challenges. However, the success of the region lies in the ability of the region to enhance its competitiveness and foster a spirit of cooperation; such cooperation requires that the political will is present to provide the support necessary for the private sector to flourish.”