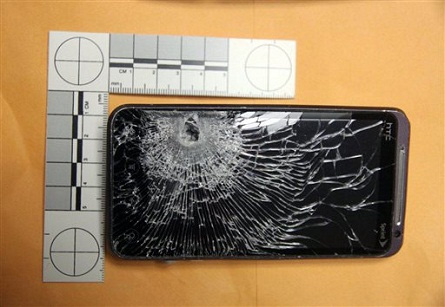 Winter Garden, Florida (AP) — The life of a central Florida gas station clerk has been saved by his cellphone.

Police say a Hess clerk sustained only minor injuries after a robber fired a bullet at the man’s abdomen that was stopped by his cellphone.

The close call happened Monday at about 4:45 am in Winter Garden, a suburb of Orlando, Florida.

A man entered the gas station and asked a clerk for help. Then he showed the worker a revolver and demanded he open the safe.

When the clerk couldn’t open the safe, the robber ordered a second clerk to try. He was also unsuccessful.

The suspect fired one round at a clerk and fled.

Police say the employee had no idea the bullet had hit his cell phone until he pulled it out of his shirt pocket.